We knew it was going to be "one of those days" when we got to the junction of the Peak Forest Canal. 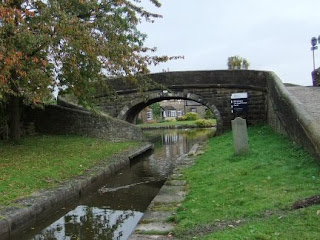 The first lock pound was totally empty.  This photo was taken about 20 mins after I'd started letting water through the lock. 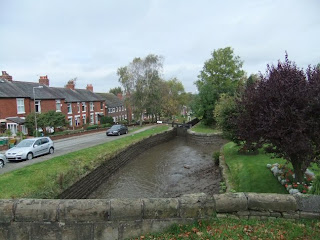 3 C&RT volunteers then came sauntering up the lock flight, saying that every pound had been empty but they had now started refilling them.  We made them a brew while we waited for the water level to raise and I asked them how long they'd been working as volunteers here on Marple Flight.  They'd started last week, were doing 4 days a week and had had no training what-so-ever!  They'd arrived last Monday expecting to be trained but had only been shown how to lift a paddle, before being taken to the office and made to sign an induction form.  They told us the "trainer" had briefly wizzed through a form, ticking boxes as he went to say that they'd been shown different things, when in actual fact they'd been told and taught absolutely nothing.

Once the pound had refilled we set off. We went first and David followed in Wye Knot.  One of the volunteers was going to help him, but first we had to show him what to do! 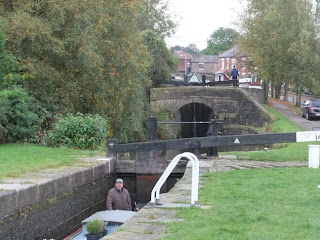 One good thing was the paddles and gears had all recently been greased. 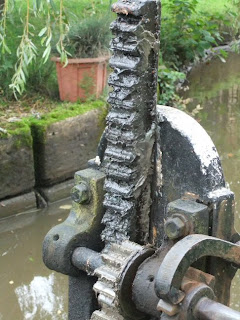 They'd even greased round the beam collar, so the locks were the easiest I've ever found them. They're still absolute pigs but not as bad as before. 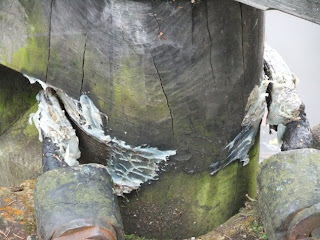 When we'd done 4 locks 2 of the volunteers were called further down the flight as the pounds were draining empty again.  They couldn't work out what the problem was, but I think it had something to do with this.  They hadn't been dropping the paddles properly, the white markers are supposed to meet. We found 2 locks had been left like this, with the paddles up about 6 ins and draining the water so I sent the youngest volunteer on to check all the other locks.  He came back a bit sheepish looking and said they were all down now. 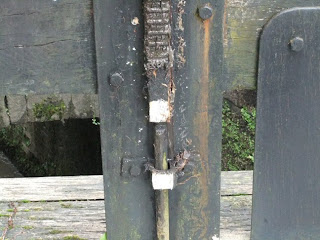 Add this to the badly leaking top gates and you can appreciate how quickly they would drain. 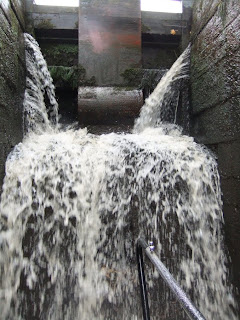 The volunteers admitted they didn't really have any idea what they were doing but were eager to learn.  They said they'd signed on for 4 days a week for 6 weeks and they'd been told that if they performed well there may be a chance of a job at the end. The youngest one tried lifting a paddle on one of the bottom gates at the same time as me.  He wasn't strong enough and really struggled and I didn't see him again after that.

Every lock we came to was empty so needed filling before we could go in which made it slow going.  The volunteer who was helping David would wind the paddles and open the gate for him to go into the lock then walk down to start filling the lock we'd just come out of, if I hadn't already started it filling first. He didn't help me close any gates though and just sat and watched me struggle at every lock. I don't think it was laziness, more that he didn't know any better and by then I'd decided it was just easier to do it myself.

By the time we'd got half way down the flight the heavens had opened and as none of the volunteers had any waterproofs with them, he was soaked. I had a spare new woolly hat in the boat so I gave him that to wear. Not only are C&RT letting them out untrained, they don't have the right clothes for the job either!

Just below Lock 7 the land around the by-wash has fallen in. It's well fenced off but, as far as we can tell, isn't on the list of repair work being carried out when the locks are closed in November. Incidentally, C&RT issued a notice last week stating that there are no stoppages on the Cheshire Ring following the canal breach at Preston Brook. Have they forgotten that Marple Locks form part of the Cheshire Ring and stoppage works ARE still going ahead? 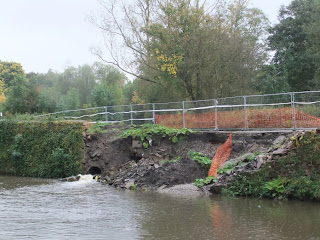 Despite all it's problems, Marple locks are still one of the prettiest flights in the country, especially at this time of year. 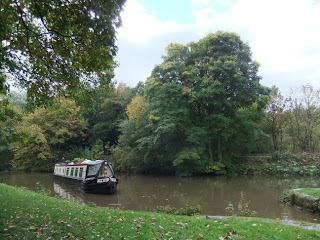 We finally made it down all 16 locks and moored just past the aqueduct, ready to continue tomorrow, once we've all recovered that is. 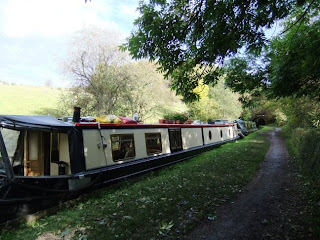