It was a lovely sunny day yesterday so while Roger was away I got the washing done and dried it outside and also caught up with the cleaning and baking.

Today we set off late morning, timing it just right so that a boat came down Willeymoor lock just as we set off to go up it. It was another hire boat, this time a woman with two small boys and two dogs. As we watched them head off in the opposite direction the woman disappeared inside and left a boy of about 7 or 8 steering the boat. He could hardly see over the boat and was zigzagging from side to side down the cut while trying to avoid tripping over one of the dogs. It beggars belief, do these people not realise how dangerous boats and canals can be or am I just over-reacting?

We had a good trip up Grindley Brook Lock flight, helped by the lovely Jill from n.b. Armadillo who was on her way back from the shop and opened a couple of sets of lock gates for us. Thank you Jill!

By the time we got to the staircase locks I'd had enough of working the locks and swapped with Roger so that he could do the work while I drove.  How is it that he always manages to have someone turn up to help him and how is it it's almost always a chatty blonde?

Going into the first lock the water was pouring over the top gates. It was a bit scary actually and although Roger said there was plenty of room in front of the boat I wouldn't fancy doing it in a 70ft one. I'd be scared the torrent would flood the bow. 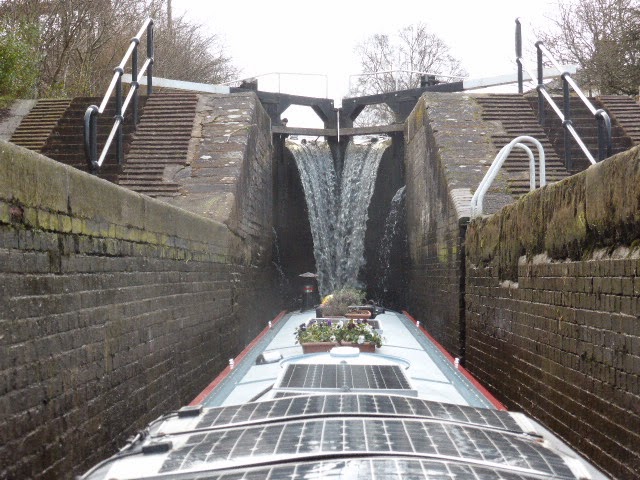 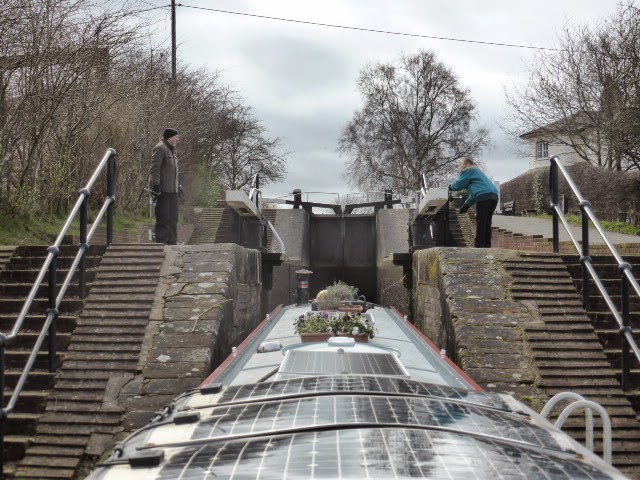 Looking back down the staircase 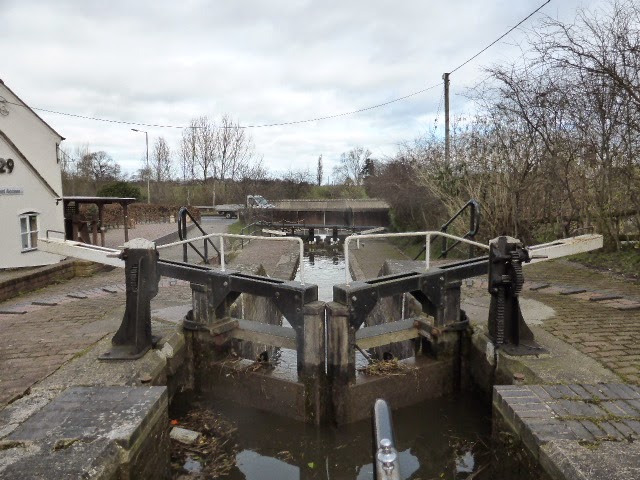 Almost at the top 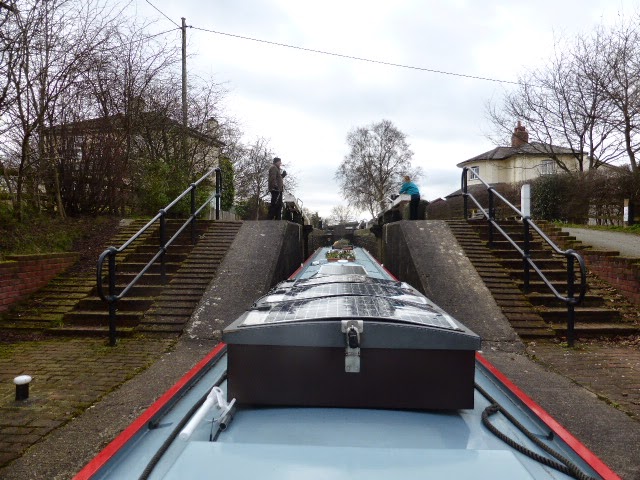 We pulled in for water at the top, having lunch while the tank was filling and afterwards had a quick chat to Graham and Jill before carrying on to moor at Whitchurch. The arm is quite busy with boats showing winter mooring permits but we're running short of food so need a trip into town tomorrow.
Posted by Yvonne at 17:05 No comments:

Idiots on hire boats......must be half term

Thanks to everyone who gave us suggestions for Sunday lunch in Wrenbury. In the end we opted for Saturday lunch in the Cotton Arms taking advantage of their 2 courses for £6 lunch club menu. The food was really good and I have no idea how they do it for the money. We're going to try it for Sunday lunch on the way back.

This morning there were a lot of hire boats going past so I assume it's half term again. The first 4 or 5 boats were Anglo Welsh and all passed us really slowly with no problems. The next 3 boats were from Norbury Junction and were travelling together. They were a bit different!  They were so busy chatting on their radios discussing who was making lunch and what they were having that they weren't watching where they were going and the first 2 boats ploughed into the side of us. We were moored on a straight section of canal well away from the previous lift bridge so it was pure incompetence on their part.  They moored up on the "bridge operation only" moorings before the electrically operated road bridge and had their lunch.  At least they thought they'd moored up, but when we crawled past on tick-over to go into the boat yard for a pump-out two of the boats swung out into the canal to bang into us. They'd moored up using stern ropes only!  We had quite a wait for the pump-out as the boat yard was closed for lunch so we sat and had our own lunch and watched the antics of these 3 boats as they attempted to get through Wrenbury  road bridge.  The first boat made it through alright but the second one smashed into the bridge so hard the whole structure shuddered. The woman steering thought it was hilarious. The third boat was also steered by a woman who was sitting down and obviously couldn't see where she was going as she also rammed the bridge really hard. She too was in fits of laughter and trying to steer with one hand while simultaneously trying to use the radio with her other hand to tell her friends how funny it was. The worrying thing about all this is that these 3 boats were full of young teenagers who were obviously on holiday and entrusted to the care of adults who hadn't got a clue about steering a narrowboat safely.  There was a dog walker watching their antics and he was so worried about the children he told me he was going to phone the hire company and tell them what had occurred.

Once we'd done the pump-put and filled up with water we carried on our way. We decided against topping up with diesel as it was 95p a litre and we're not desperate.  It was a beautiful afternoon for a cruise and thankfully the forecast of rain and wind was wrong. We passed Jill and Graham on n.b. Armadillo but there was no sign of life and we couldn't stop as we've got an appointment further up stream tomorrow.
Posted by Yvonne at 17:56 2 comments:

On the move again

I had a really good time with my friends in London but it was nice to back home on the boat.  I'd been a bit worried about going on my own as I've got a dreadful sense of direction and had visions of getting lost on the tube system, but thanks to a couple of really useful phone apps I managed to get across the city without any mishaps, even when there were a lot of tube closures on Sunday due to maintenance.

We had planned on staying in Nantwich until Thursday but we were both getting itchy feet so we set off this morning climbing the 4 locks at Hurleston onto the Llangollen Canal and where we saw our first wild daffodils of the season. 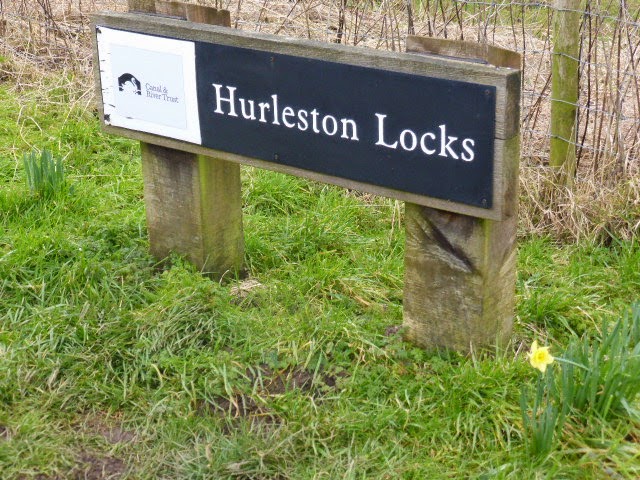 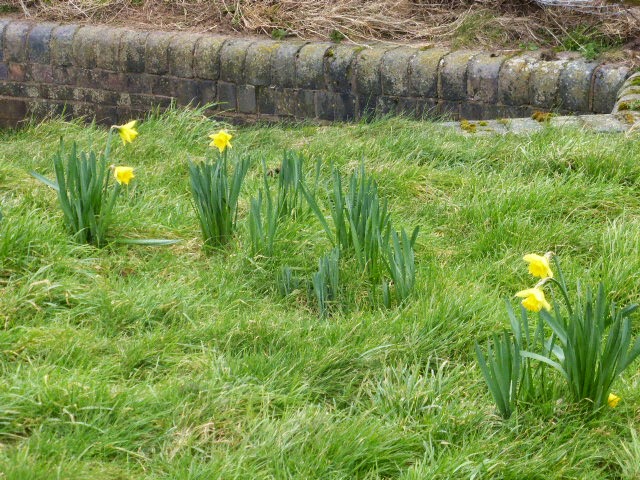 The bottom lock is possibly the narrowest on the canal system and boats are warned to take in all fenders, otherwise they'd get stuck. We never cruise with side fenders on but the bow swag fenders which normally protect the bow from damage on lock gates had to be lifted and tucked into the cratch. 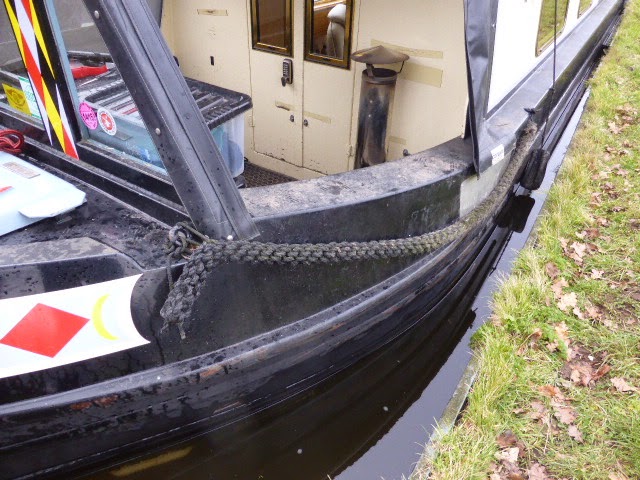 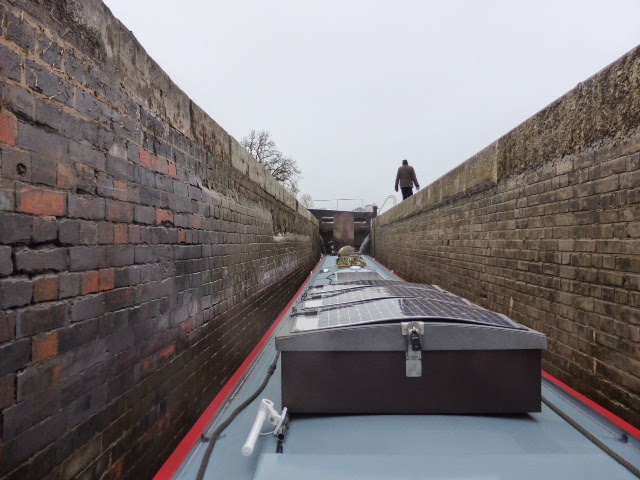 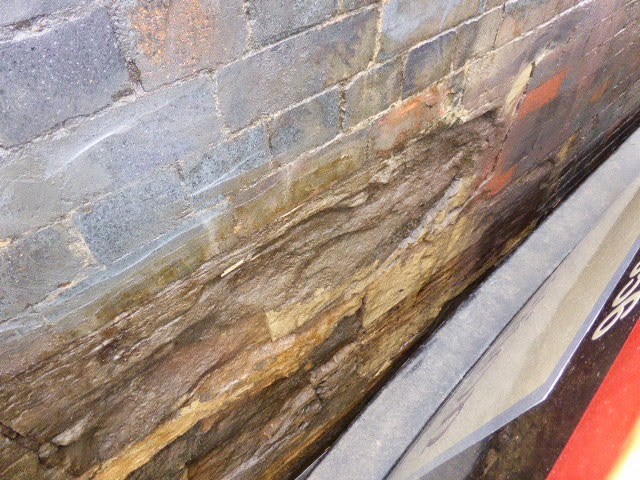 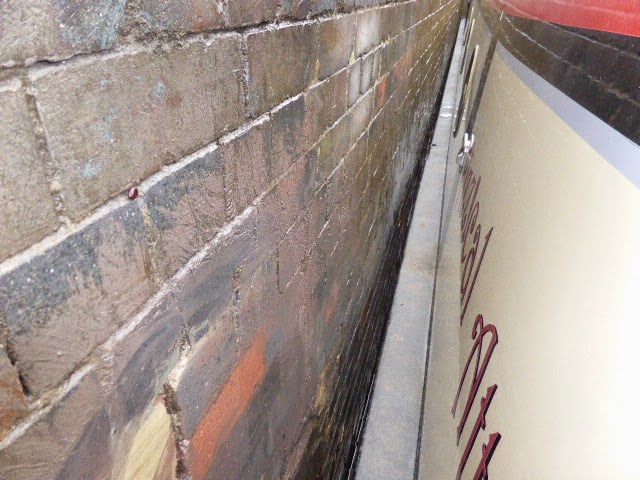 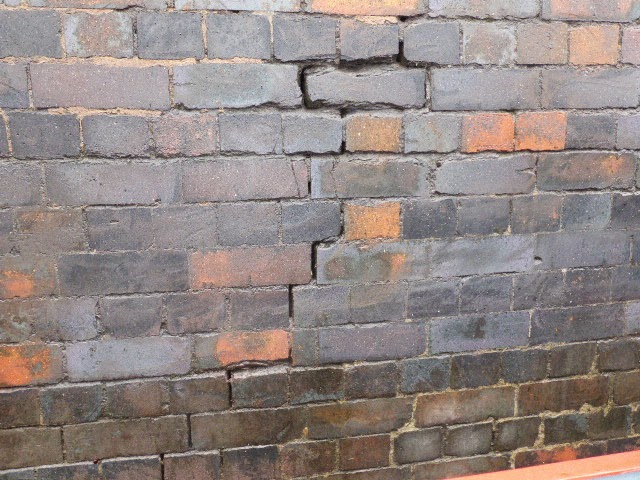 It was only a short cruise today and we've moored at the top of the locks beside the egg farm. 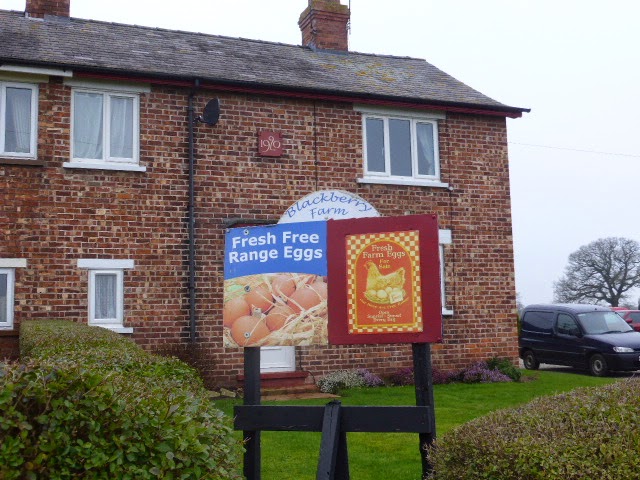 Our next stop will be at the ice-cream farm, maybe tomorrow or maybe on Thursday. We haven't decided yet but there's no rush to be anywhere special, although I'd like somewhere good for Sunday lunch so if you've any suggestions please let me know.
Posted by Yvonne at 16:38 6 comments:

I haven't bothered blogging for a few days as there's not a lot to tell you really.  We're very proud that we raised over £400 for Cancer Research but we're also really glad that January is now over!

We're now moored in Nantwich just killing time as I'm off to London for a few days, leaving Roger and Chico to fend for themselves. Hopefully by the time I get back the ice will have melted and we can carry on towards Llangollen. 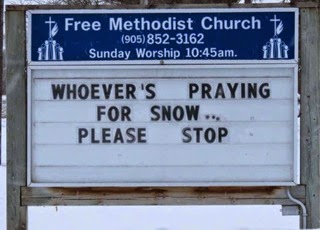