Ooops.....it's been 10 days since my last blog.  Doesn't time fly quickly when you're having fun?

We're currently moored at Nantwich for the 20th Jazz, Blues and Music Festival.  As last year, it's a really good event and if you like music it's definitely something to add to your calendar. You need a wrist band to get into the majority of events which are held in the pubs and clubs around town, but at £7 for the weekend its extremely good value.

We've been joined by our boating friend David on Why Knot 2 and so far we've seen half a dozen really good acts. 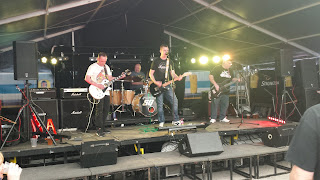 Yesterday we saw Alex McKown Band.  This was the third time we've seen this young band but I sincerely hope it won't be our last.  Alex is a budding Joe Bonamassa and has a really bright future in front of him. He sure can play Blues guitar! 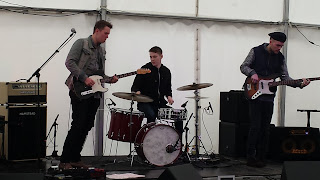 Today we watched a duo we'd seen last year. Baxter are described as "the thinking man's Renee and Renata".  That really doesn't do them any justice. They are a local duo who sing and play a wide variety of music from folk to the Stones. Whatever they played they certainly entertained the audience and had us all singing and dancing along. 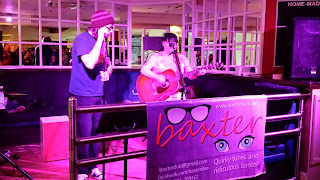 Later on this afternoon we returned to the Railway marquee to see another band we've seen before. We were a bit early so it was silly selfie time 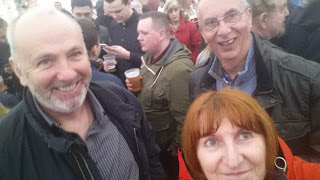 It was definitely worth the wait and I haven't bopped so much for years. The band was called Tumbling Dice and mostly played Rolling Stones although they also threw in lots of other rock tracks as well. The place was absolutely rammed.  Not bad to say that only the lead singer looked under 65! 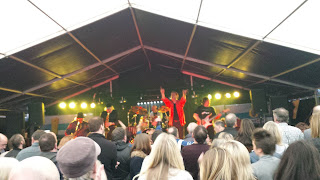 I hope you're having a good Easter wherever you are.  Bye for now
Posted by Yvonne at 20:22 No comments:

By the time we left Ellesmere this morning the mist had lifted  and it's been another gorgeous sunny day again here. I hope it's been as nice wherever you are.

We're moored in one of our favourite places, near the junction to the Prees branch and with views over the mosses. The evening bird chorus is lovely and there is a barn owl flying low over the field on the other side of the canal.

We've taken full advantage of the sunny afternoon. Roger washed all the coal dust and green moss off the roof while I planted up a few flower and herb tubs. 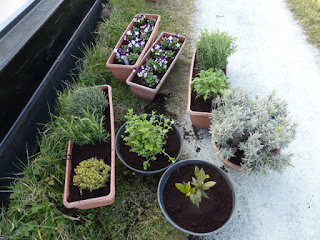 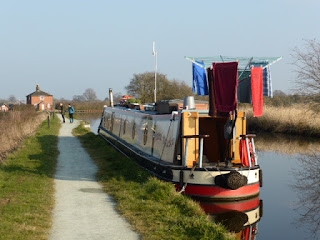 and the bench under the chestnut tree was the perfect spot for Roger to sit in the sun and play his guitar.  I did suggest that he put a hat out for donations from passers-by but that didn't go down too well.......... 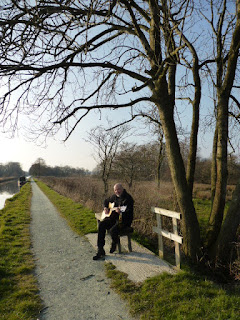 Bye for now, please come back again soon
Posted by Yvonne at 17:28 No comments:

Hi, it's nice to see you again.

Every few months we hire a car and go "up north" to visit our daughter's family.  As usual we rented from Enterprise Car Hire who collected us from Chirk. We took Chico to the kennels - Plumtree Boarding Kennels in Oswestry - and set off up the M6. It's a really beautiful stretch of motorway through the lake district and there was still snow on the tops. Our sat nav took us the scenic route from Carlisle to Northumberland. The views were spectacular as we drove across the moors and through the artillery ranges. For most of the way the road was single track and at one point I had to get out and open a gate. I'm sure there was a more direct route along A roads but it was so pretty up there that we returned by the same route on Monday.

We had a great time with our grandchildren. It was even wonderful to be woken up at 6.30 am because "it's time to play Granny!"

On Sunday we went to the local National Trust property Cragside. It was the first house in the world to be lit by hydro-electricity and both the house and grounds were fascinating and well worth the visit. 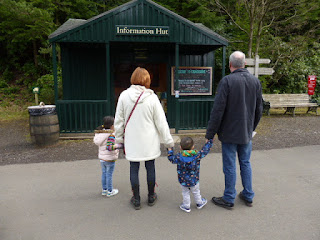 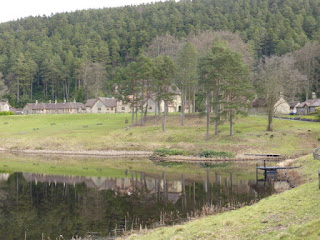 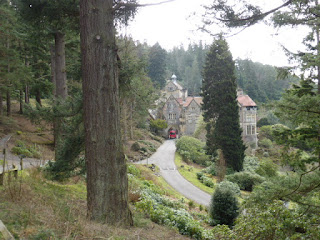 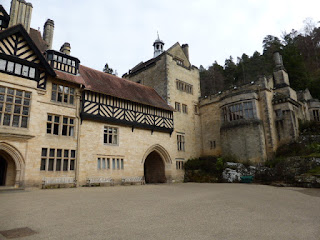 The former owner Lord Armstrong was a keen landscaper and collector of pine trees from around the world. Some of them were huge! 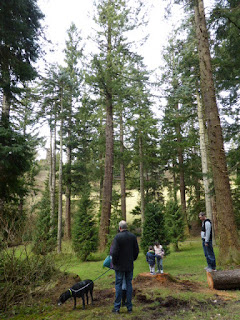 After a lovely weekend with gorgeous warm and sunny weather, we're now back on the boat. We're currently moored at Ellesmere where I stocked up at Tesco, but this time it's just a one night stay and we'll be on the move again tomorrow.

Bye for now,
Come back soon
Posted by Yvonne at 18:38 No comments:

When I was having my cancer treatment 3 years ago I joined the Breast Cancer Care forum. Every month they start a new group so you are in touch with other women starting chemo at the same time. We've supported each other through the bad times and have lost 3 lovely ladies along the way but most importantly we've built strong relationships and become great friends.

We weren't sure if we'd all get along "in the flesh" but after arranging a weekend in Birmingham 2 years ago we've found that the bond between us has just got stronger. London seems to be the easiest place for us all to meet up and last year we rented 2 appartments, This year more ladies were able to come and we managed to get a group deal at a lovely hotel near Regents Park which is where I've been this weekend.

I got the train from Chirk to Chester then another one to London.  The others came from all over the UK with one lady flying in from the south of France. Some stayed 2 nights, others could only manage 1 night and those local to London just came for lunch on the Saturday.  We had an absolute ball, eating and drinking far too much and laughing even more.  In fact we had such a great time that we're already planning next year's event. 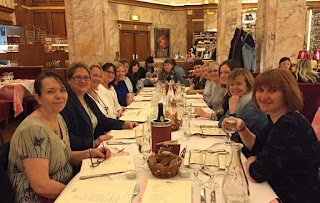 My journey home was a bit of a nightmare though. My train was stuck behind a broken down train at Rugby which meant we had to change trains and routes to continue the journey.  What should have been 2 trains home turned into 5 trains and I eventually got home almost 3 hours later than expected.I'm just glad it happened on the way home or I'd have missed some of the fun.  Roll on next year!
Posted by Yvonne at 12:04 No comments: