Doesn't time fly?  I can't believe it's been so long since my last blog.  It's been an eventful 3 weeks too.

First David came to stay for a few days at the beginning of January.  Both Roger and I were still struggling with the lurgy, but that didn't stop the men going karting.  David had never been before but enjoyed it so much that he's coming back again next month for another session. 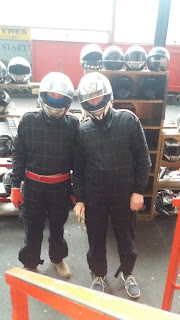 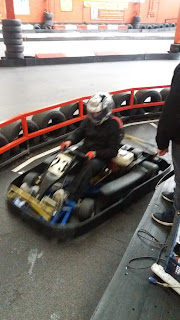 After David had left us we took the boat to Sainsbury's to stock up. You can moor right outside the supermarket which makes it really easy to do a big shop.  We were just about to set off again when Roger spotted a man in the canal.  He rushed over and with the help of a passerby tried to pull the man out.  It was an elderly boater who had slipped in as he was pushing his boat away from the bank. The canal is very deep here and he couldn't touch the bottom. I'm sure you can imagine just how cold the water is at the moment and the poor man was in shock. The two men couldn't haul him out as his sodden clothes were so heavy they kept dragging him back down.  Luckily we'd recently bought a combined safety ladder/gang plank which I carried over for them to use. 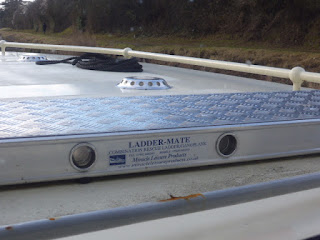 We managed to get a rope underneath his armpits and it then took the three of us to haul him up the ladder onto the towpath. In the meantime another passerby had phoned the emergency services who arrived a couple of minutes after we'd got him out of the water.  Because he'd been in the water for 30 minutes he was suffering from hypothermia so the paramedics took him to hospital where they kept him in overnight.  After securing his boat and making sure the fire was damped down we moved our boat to moor beside his to make sure nothing untoward happened to it until he got back.  He'd told me that he was 75 so I was a quite concerned for his health but he arrived home at lunchtime the next day and apart from being tired due to lack of sleep in the hospital he said he was OK. I won't mention his name of that of his boat as he was very embarrassed but we've seen him since and he seems to have recovered from his fall.  He was a very lucky man.

Living on Bluey is quite different to living on the narrowboat.  Because we'd built Fizzical Attraction for us to live on it had under-floor insulation, secondary double glazing, a solid fuel fire and a cooker extractor fan to make sure that we had the minimum amount of condensation in the boat. Condensation = Damp = Mould and apart from ruining clothes mould can be seriously bad for your health.
Bluey had none of these features and we've been fighting a losing battle against damp patches, so for the past 2 weeks we've made a concerted effort to get rid of the cold spots that have caused condensation & damp and consequently mould.

The first major job was fitting a Dometic cooker hood. Being vented outside this has made a dramatic reduction in condensation in the boat caused by cooking and washing up. 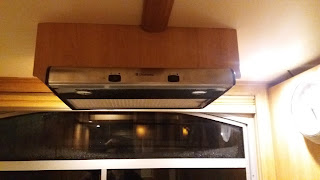 We store a lot of things under the beds but as there is no under-floor insulation these are intense cold spots and were getting very damp.  We dried the area out using a de-humidifier (best thing we've ever bought) and then lined it with silver foil backed bubble wrap insulation which is sold in Wickes. 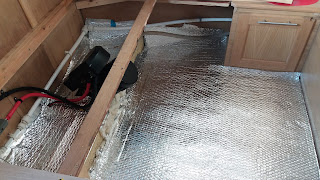 The foil insulation made a huge difference to the temperature in the bedroom and should cure the problem. 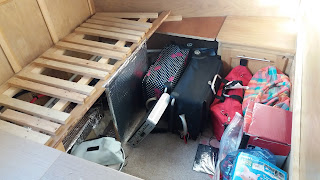 I've also put a tray of silica gel cat litter under the bed to soak up any further damp but I doubt it'll be needed. 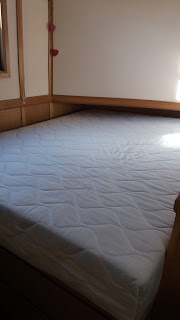 We've also insulated inside the wardrobes and underneath cupboards and later on we'll insulate under the floor which is the ceiling to the engine room. That should help keep the living room warmer and also deaden the noise from the engine a bit.

While it's been very cold recently, it's also been bright and sunny and the solar gain through the windows has been very noticeable. Unfortunately that also means we have a lot of heat loss through them at night and secondary double gazing is high on the list of jobs to do before we head off to France.

Chico is a real sun worshiper and loves it when the rays land on his bed. 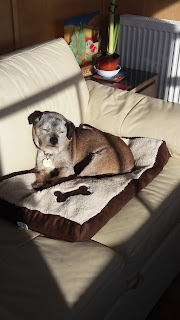 That's all for now
Take care and come back soon.
Posted by Yvonne at 19:07 6 comments:

Hello, Nice to see you again 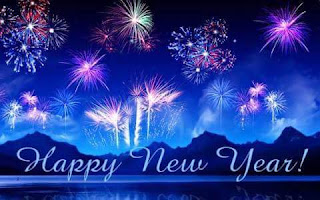 I'm a bit late wishing you Happy New Year as we're both a bit under the weather with the dreaded lurgy.  We've had it for a week now and neither of us can remember ever having had such bad colds before.  On the plus side, we don't need to make resolutions to go on diets as neither of us has felt much like eating so haven't put on any weight over the holiday period.

We did have a wonderful time over Christmas though.  Our daughter and her family came to stay and Christmas morning was just magical.  We'd had all the awkward questions about how Santa would find the children to leave their presents and how would he get into the boat as we don't have a chimney.  All I can say is thank heavens for B&M Bargains.  A magic key plus "Santa Please Stop Here" sign and door mat calmed all fears.

Spiderman is all the rage at the moment and Santa managed to find a suitable playsuit for our grandson. 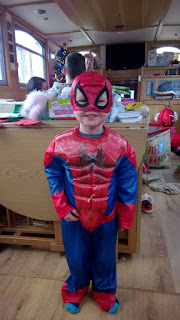 We had a major panic just before Christmas when the generator packed up again.  It's a good job Roger can fix most things and once again the problem was down to shoddy initial installation and loose connections.  He's got lots of work planned for as soon as he's better. The next job is insulating all the heating and water pipes under the floor and yesterday we moored near Two Mile Bridge so that we could walk to Wickes to take advantage of their sale and buy lots of the foam insulation.

That's all for now. Take care and come back soon
Posted by Yvonne at 15:17 No comments: