It's been a nice day here in Chester, bright and sunny but with a bitter twist. It only managed to get up to 3' and a brisk pace was needed to keep warm when we went out for a walk.
We went back up to Greenfield Lock to check on the progress.  Arriving at 3.45 the workmen had disappeared but we could see the progress they've made. The new lock gates have now been fitted and the paddle gear is back in place. The pointing looks to be almost finished too, so hopefully the lock will re-open on schedule and set us free. 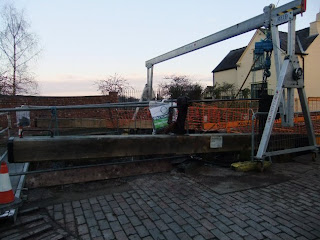 Although Chester Council are superb at cleaning the streets and towpath of rubbish there's always a lot of it floating in the canal and every morning we have a bag full of polystyrene food containers, drinks cartons and bottles trapped up against the boat. We've started picking it out of the water and taking it to the nearest litter bin but I fear we're fighting a losing battle. Today it filled a black bin bag rather than the usual carrier bag. 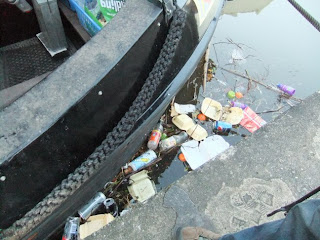 The weather for the past few days has been pretty grotty as we've had more gales and rain. Today it was sunny and fairly calm so we decided to go and check on the progress of the works at the locks.
At Tarvin Lock they've put stop planks in to lower the water level in the pound up to Greenfield Lock. You can now see the culvert below the lock paddles. When the paddles are raised the water rushes down the 'hole' and into the lock to fill it. 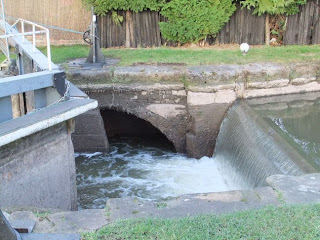 At Greenfield Lock the BW guys were working away. 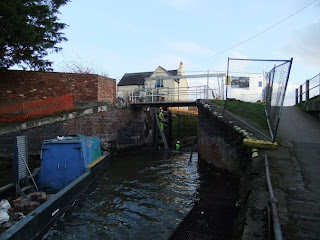 2 men were fitting the bottom gates while another was pointing the brickwork on the lock walls. 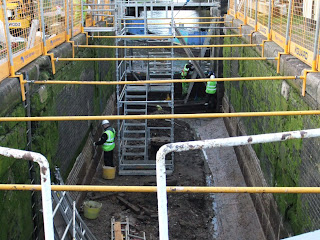 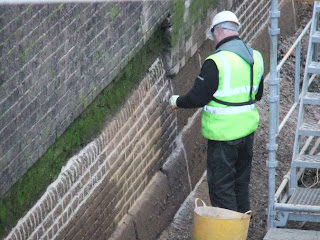 The hole you can see in the lock side in the photo below is where the water comes into the lock from the culvert above. The water flow can be very fierce if you don't raise the paddles slowly. 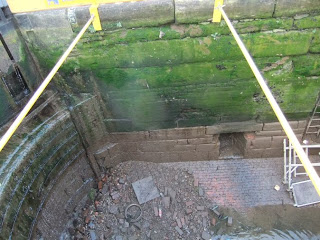 If you remember, on our trip into Chester before the stoppages I had to prune branches from a tree which was quite low over the canal so that we could get through.  It's now been chopped down and this is all that's left.  Some of the logs have been stacked up to 'season' ready for use as firewood. 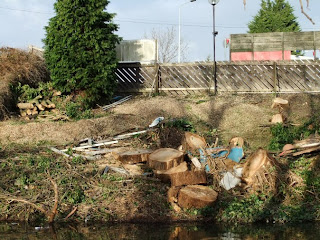 In the other direction, the works to Northgate Staircase Locks aren't progressing very well. I spoke to one of the BW guys who told me that the works are behind schedule due to problems they've been having with hired-in plant and machinery. He did say, however, that they're hoping to make up the delay and hopefully still finish on time. 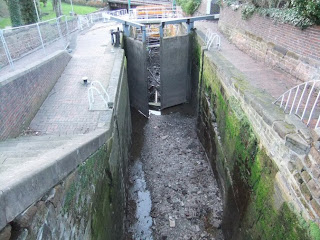 These shoes were all recovered from the locks. I suppose it makes a change from shopping trolleys and bikes. 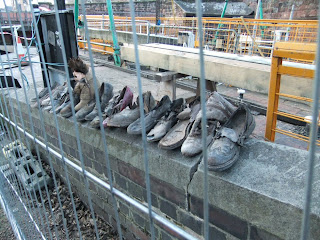 A bit of hooky

I was given this beautiful book of crochet patterns for Christmas and have got "hooked" on one particular pattern. 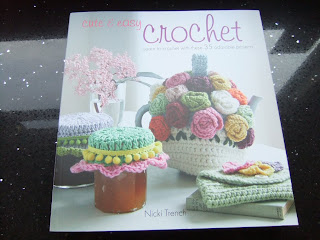 I loved this blanket so much I decided I HAD to make it. So unfortunately everything else is falling behind, including updating the blog. 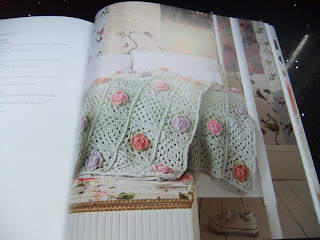 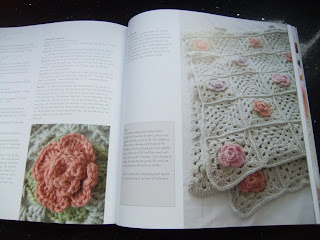 We're still stuck in Chester, so I'm making the most of the quiet time before we start travelling again to try and get it finished. I didn't realise just how addicted I'd become, but I suppose that's a good thing since I have to make 71 plain squares and 71 flower squares. 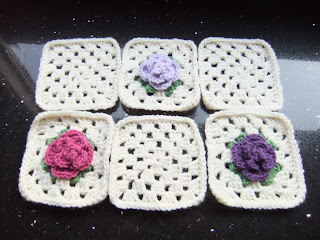 I've made about half of the squares now so I'll show you the photos when it's finished.
Posted by Yvonne at 15:26 1 comment:

Email ThisBlogThis!Share to TwitterShare to FacebookShare to Pinterest
Labels: crochet

On Thursday evening our TV packed up. It just wouldn’t switch on and the green power light was flashing red.  It’s only just 3 months out of it’s 3 year warranty and we didn’t fancy having to replace it or pay exorbitant repair costs so Roger went on the internet and found a forum specific to TV problems. Aparently the main problem with modern TV’s is the capacitors which are only rated at between 1000 - 2000 hours i.e. just about 3 years. 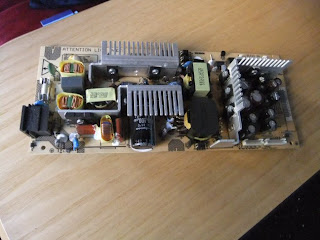 He managed to find the capacitors on-line so stripped the TV down to have a look and see if that could be the problem.  Low and behold, one capacitor had blown and 2 more were showing signs of deterioration so he ordered replacements which were delivered and replaced today.  Total cost for the repair?  Under £9 which included 5 of each type of capacitor and postage and the job took less than half an hour.  My husband the hero!

Incidentally, in case he couldn’t repair the TV he also sourced a suitable replacement TV online for only £139 plus delivery. However did we manage before the internet?
Posted by Yvonne at 15:56 1 comment:

We collected our car today and went over to visit our friend Dave who's just moved out of Tattenhall Marina and into Aquduct Marina at Church Minshall. On the way back we stopped at the Badger Inn in Church Minshall for Sunday lunch.  We last visited this pub about 6 years ago but didn't stay long as it was a dump with miserable grumpy staff.  It was refurbished last year and re-opened in August and I must say that the lunch was fantastic. Very rare roast beef with huge crispy Yorkshire pud, roast potatoes and 4 veg for £10.95  The beef was so tender you didn't need a knife and looking around the restaurant all the other meals we saw were being demolished with gusto which bodes well for the rest of the menu. I just wish it was beside the canal in which case it would definitely become a regular stopping place for us.
Posted by Yvonne at 17:36 No comments:

It's been a a beautiful day today, blue skies and sunshine, so we went for a walk around Chester's wall.  Just off the main ring road is a quiet oasis in the form of the Roman Garden with it's gorgeous mosaic and it's Roman remains. 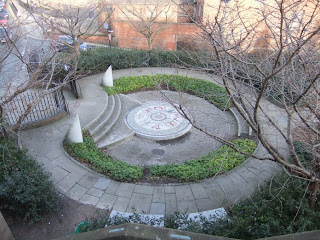 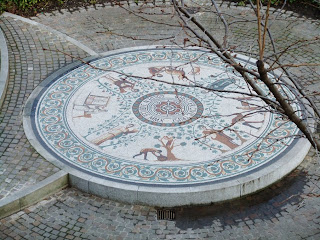 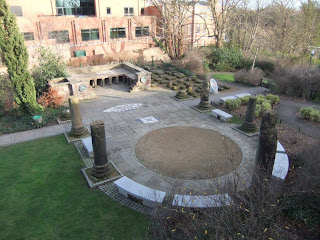 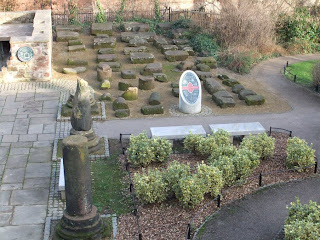 Oh and it's squirrels too. 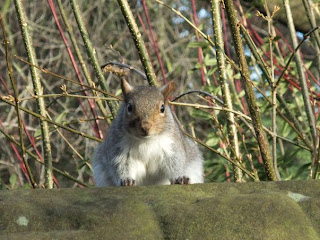 There's obviously no water shortage round here as the walkways beside the River Dee have recently been under water. 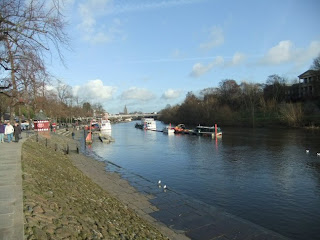 We'll be in Chester for a while

Because of the gales we were unable to move out of Chester before the stoppages at both the staircase locks and Greenfield lock, so we'll be here until the beginning of February. It's times like this when you find out just how good friends can be. Bargee Bill, who we met back in December and who is the skipper of the restaurant boat at the Mill Hotel, has been wonderful. He took Roger to get coal yesterday and let us fill up with water at the hotel last night, while the restaurant boat was out on a trip. 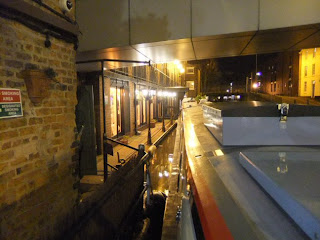 Life's certainly never dull living on the boat!
Posted by Yvonne at 11:04 No comments:

It's been a bit windy!

Like most of the rest of the country we've been getting battered by the gales. At 5.00 this morning the wind was so strong that it blew the cratch cover open on both sides and I had to get up and go and zip it back up again before any damage was done. Later on it blew the studs open as well. Thankfully the worst of it seems to be over, although the waves on the cut are still pretty large and we're bobbing about a lot. 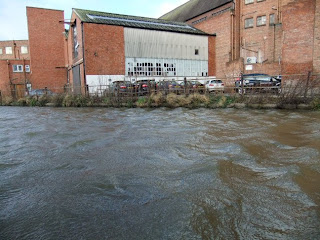 We were woken at 6am by the gale force winds howling and rocking the boat. It didn't last long and when we finally got up at 9.00 it was fairly calm and sunny so we set off back down the locks towards Chester,chasing a rainbow for about half an hour. 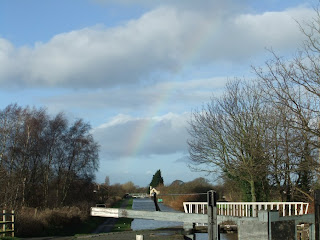 By the time we got to the third lock the wind had got up again and at one point it was so strong it was difficult to keep the boat from going sideways down the cut. Thank heavens for the bow-thruster. We don't use it very often but it certainly came in handy today.  As we came out of Tarvin Lock there was a tree hanging low over the water. It hadn't blown completely over but some of the branches were too low for us to get through without scratching the paintwork, so while Roger carefully inched the boat forward I stood on the gas locker and used the secateurs to "prune" the tree. It didn't take long but made a huge difference.  Up until that point we hadn't heard about the gales battering the rest of the country and I think all in all, we got off very lightly round here.

The last lock is at Hoole Lane and below it the canal was covered in rubbish bags, plastic sheets, floating polystyrene and a plastic pumpkin. All the bags were from B & M Home Store so I assume one of their rubbish bins had been blown over by the wind.  Once I got the gates open, Roger gave the engine a good blast and then cut the power to coast past the rubbish and avoid getting all sorts of crap round the propeller. The photo only shows about half of the floating rubbish. 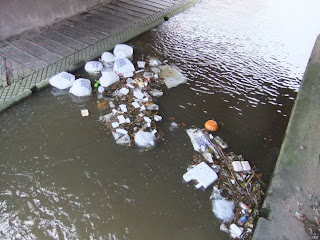 We're now safely moored in Chester and have been and raided Tesco's to re-stock the fridge. The shelves and fridges seemed quite bare after the holidays but they had everything we needed to last us a week or so.
Posted by Yvonne at 19:36 No comments:

Whilst we prefer mooring in out of the way spots it does have it’s draw-backs, the main one being the lack of local shops. This morning the fridge was almost empty so we decided to turn back towards Chester & Tesco’s. We’re now moored at Christleton, on the only remaining space before the locks which lead down into Chester and we’ll continue into town in the morning. The weather has been really beautiful, if a bit chilly, and there are a lot more boats about than there were before Christmas. I suppose many have come out of their moorings for the holidays.

I don’t buy ‘convenience’ foods, all our food is cooked from scratch, but with an empty fridge and a rumbling stomach it was a case of  seeing just what we did have and coming up with something nice for lunch.  We didn’t have enough cheese for cheese on toast but there was a slightly limp cauliflower in the veg drawer so with the addition of an onion I made cauliflower & cheese soup. It was really good too and the leftovers will do for lunch tomorrow before I raid Tesco’s. I’d taken a bag of frozen, chopped plums out of the freezer so for pudding I made a plum and almond crumble. I’ll post the recipe for that another time

Chop the onion & cauliflower into chunks and simmer in the milk and water, along with the bay leaf and stock cube, for about 20 mins until soft.
Either liquidise or push through a sieve until smooth.
Return to the pan and bring back to a simmer.
Add the cheese and stir till melted. 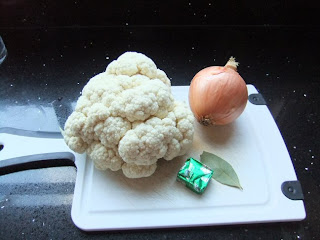 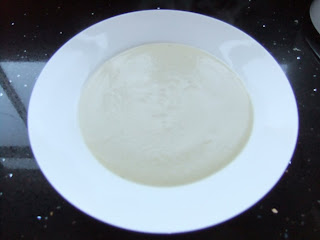 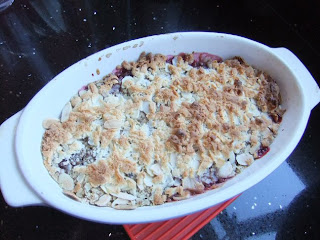