The next chapter of our life story has begun

Hello, welcome back. Sorry it's been a while since my last blog but we've been a bit busy moving.

We delivered Fizzical Attraction to her new owners Howard & Lynn in Yelvertoft Marina and rented a van.  Roger reckoned we'd get everything into a Transit but I insisted on a bigger van as I didn't think that would be big enough. Enterprise actually upgraded us to a high top long wheel base van which was only just big enough.  It took us almost 2 days to decant all our worldly possessions and clean out Fizzi and it's a good job we weren't stopped by the police as I'm certain it was overloaded. 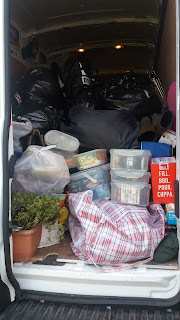 Chico's never been a good traveller whenever we've rented a car but he loved the van and curled up in his basket in the sunshine and slept all the way to Bristol. 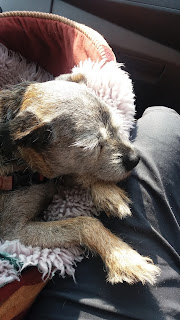 He soon made himself at home in the sun on the gunwales and stayed there while we unloaded the van. 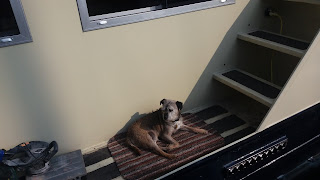 
The Master Bedroom with ensuite off to the right 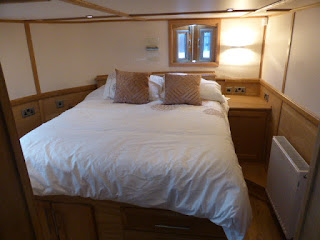 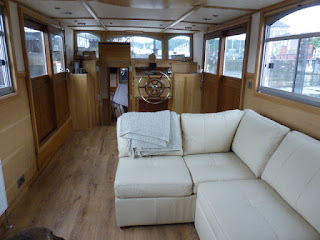 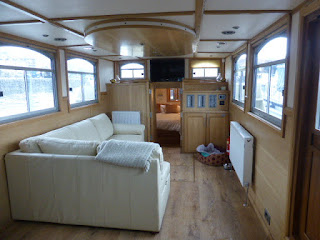 The galley - the cooker is minute compared to the one on Fizzi and the drawers to the left of it are unusable as the steps are in the way. 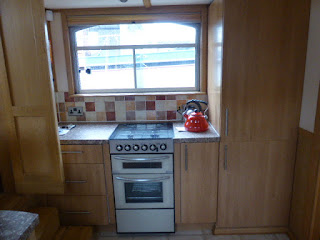 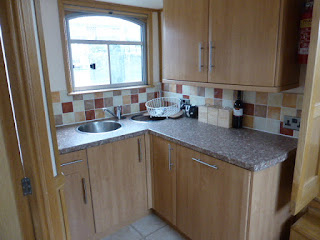 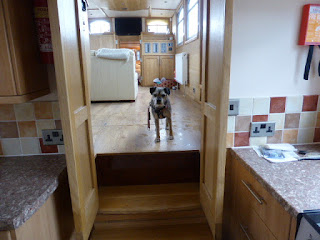 The second bedroom, in the bow 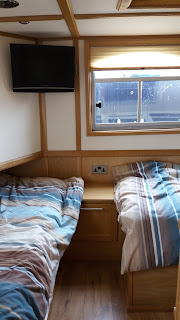 There's also another main bathroom adjacent to the galley.

It's a lovely boat and felt like home as soon as we moved in BUT there's no storage at all apart from a couple of small kitchen cupboards and a small wardrobe in the main bedroom so we've got a lot of upgrading to do.

First task was to empty and check the integral water tank because water coming from the taps was dark brown and smelled dreadful. It took half a day to siphon the water out so that Roger could get inside to inspect it. 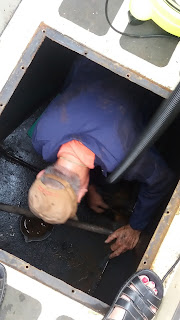 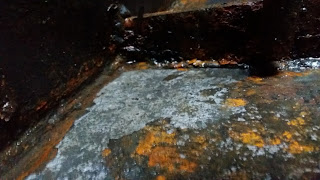 The problem was sludge in the bottom of the tank, probably due to the fact that the boat has been unused for the past 5 years.  The outlet pipe was also much too close to the bottom of the tank and was drawing up this sediment into the system. Once the tank was dry Roger gave it a good coat with Furtan rust converter and chopped a couple of inches off the pipe.  It took 3 hours to refill the tank and we calculated it at 1800 litres which is 3 times the volume of the tank we had on Fizzi.  After sterilising it with Milton, emptying and refilling with fresh water we now have good clear water throughout. All I need now is a drinking water filter on the kitchen sink but that'll have to wait as I want the small round bowl and drainer replacing with a standard bowl and a half sink unit. My kitchen has to be functional rather than decorative and the current arrangement may look nice but is totally impactical.

Next job was to reconfigure the galley to suit us better. That meant ripping out and selling the small cooker (which had never been used) along with the unusable drawer unit and replacing them with a washer/dryer and large double oven and 5 burner hob. 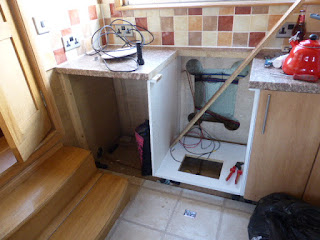 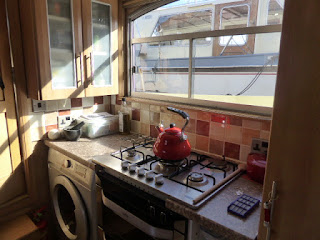 For the few days we were without a cooker I had to manage with this one ring electric hob and an electric kettle. It worked quite well but I'd hate to have to have an all electric boat as every time I wanted to brew up or cook anything I had to run the generator. I know lots of people have gas free boats these days, but it just doesn't seem right to me. 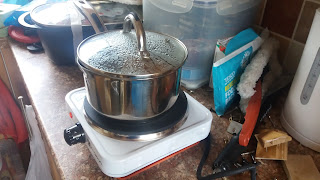 We've ripped out and sold the dishwasher (again unused and still with the packing inside it) and have now fitted a more functional drawer pack with pull-out baskets which will be the larder. 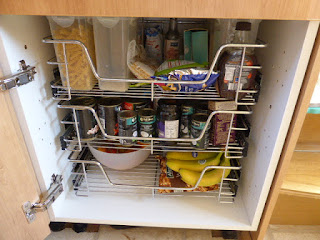 So there you have it. We've only been here for 10 days but have done lots of alterations, as well as cleaning.  We don't actually have any working toilets at the moment as the boat builder - who shall remain nameless- fitted yacht toilets (which are supposed to discharge overboard) to the waste tank. These don't have non-return valves inside the mechanism so every time you flush them they back-fill from the tank into the bowl......disgusting!!!  They're next on the list but haven't been a priority as the facilities here on our mooring are superb and we've been managing quite nicely.

We're having a day off today, hence I have time to write this blog.  We've just been out for Sunday lunch and Roger is sat in the sun playing his guitar. Life is good and we've definitely made the right move.

We've just spent a few days at Crick but it's a communications black hole with no decent phone or TV signals and the only internet we could get was what we pinched off the restaurant we were moored opposite.  Roger needed to hire a car for a quick trip back to Bristol to liaise with the engineer doing works on our new boat but apart from that we've just been killing time.  We've now got a firm completion date though and have made all the arrangements to move out of Fizzi and into the new boat next Tuesday.

It's quite alarming how much we've come to rely on good internet access. I can live without TV but we've felt really isolated without the net, especially as Roger has needed to research equipment manuals and suppliers. So this morning we've left Crick and moved back towards Watford Locks. Internet is passable but there's still no phone or TV.

This will probably be my last blog before we deliver Fizzi to her new owners at weekend as I just don't have anything interesting to tell you about. Hopefully there'll be decent wifi in Yelvertoft Marina so I can introduce you to her new owners before we leave.

Bye for now
Posted by Yvonne at 15:50 No comments: