Hi, sorry I haven't blogged since leaving Liverpool. We've had a few problems getting internet as our wi-fi box, which has served us brilliantly for the past few years, suddenly decided to give up the ghost. We had internet through our phones so were never out of touch with the real world and are back online again thanks to a new mi-fi unit.

We hardly ever have any problems with rubbish getting stuck around our propeller as we have a very efficient blade fitted on the prop shaft which cuts weeds  and plastic bags off. No matter how sharp it is there was no way it could cope with this pair of fisherman's trousers which we picked up in Wigan. 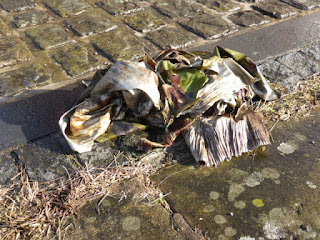 Luckily we'd recently bought a new toy "just in case". We've always had a dedicated carving knife to deal with any stubborn crap but this was the first occasion Roger had had to try out his folding pull-saw. It's pretty lethal and worked amazingly well. Hopefully he won't need to use it again for a very long time. 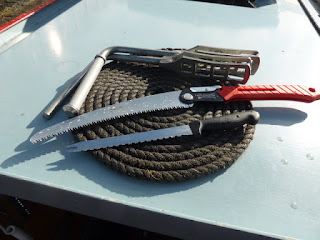 The trip from Liverpool to Manchester was made in gorgeous unseasonal weather. It was warm enough to still be in t-shirts and we had some amazing sunsets. The autumnal colours of the trees were pretty spectacular too. 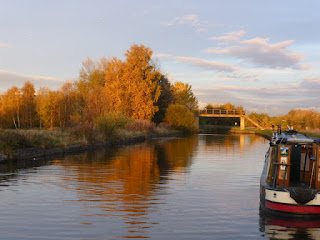 We needed to be through Worsley by Monday as the Bridgewater Canal was being closed for 4 months for installation of a new gate which will raise up off the canal bed to form a barrier in case of a breach. 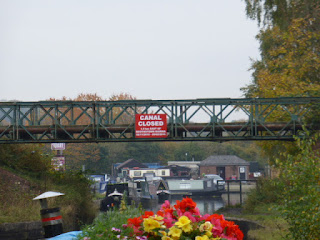 Spending a night in Boothstown gave us the opportunity to catch up with the 2 guys who used to work for us when we were still building boats. Stuart is now a buyer for a major wholesaler and Jimmy has retired. It was hilarious as we all tried to remember our sign language as Jimmy and his wife are profoundly deaf.  Strange but I could only remember the swear words.............. 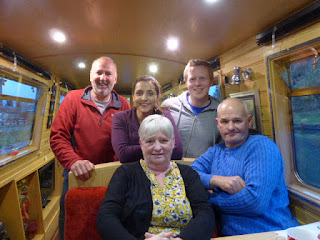 After Boothstown we spent a few days in the centre of Manchester in Castlefield Basin. On Wednesday evening we had a night out with David who has been travelling with us for the past 5 weeks. We started off with cocktails in Cloud 23 bar in the Hilton Hotel. It's on the 23rd floor and the views were spectacular. The prices were too!!! 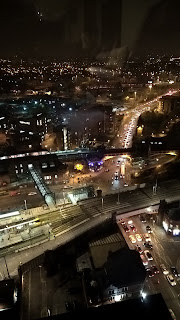 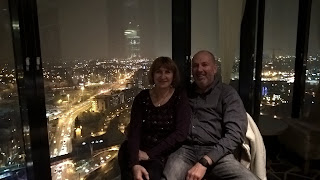 After cocktails we walked into China Town and went for a Japanese Tapanyaki dinner. The bibs were compulsory! 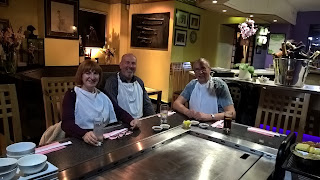 Yesterday David helped us up the Rochdale Nine locks before leaving us to go back to his winter moorings. 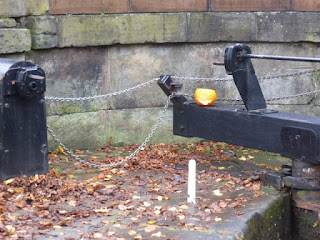 The duck des-res was looking a bit overgrown 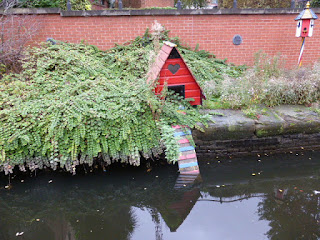 but the flowers beside the locks in Canal Street were still well tended and in full bloom. 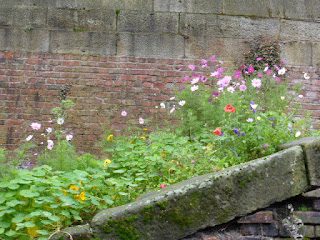 There was a lot of rubbish in the water, unfortunately including lots of syringes and used condoms. It made me laugh that there were also several unopened packets of condoms floating about - all size extra large!!

Today we set off early to come up the 18 locks on the Aston Flight. We had a really good trip until we got to lock 16. We hadn't seen any other boats all day but when we got to no. 16 there was a small boat moored up. I went up to empty the lock but it wouldn't drain properly as one of the top hydraulic  paddles had failed and was stuck open. A woman off the moored boat came to say she'd phoned CRT yesterday but no-one had been. Roger phoned the help-line and within 10 minutes a very nice CRT man arrived. He said he was aware of the problem but was unable to fix the defective paddle without using stop-planks and was unable to do that without getting the works signed off by an engineer which would take weeks. With his help Roger managed to man-handle the bottom gates open and we carried on our journey. Unfortunately the people on the moored boat had disappeared so we weren't able to help them through. They hadn't been on-board yesterday when the CRT guy had come round either.  Lock 17 was uneventful but when we got to the top lock no. 18 we had more problems. We couldn't get the hand-cuff locks off the top paddles so had to phone CRT again. By the time the CRT guy arrived 40 minutes later the boat was about half way up the lock, thanks to a leaking top gate. He was extremely apologetic; the top lock has extra long hand-cuff locks on it to stop the local scroats messing with the paddles but unfortunately he'd forgotten to undo them this morning. We'll never get caught out like that again. One of the next jobs Roger is planning on doing is making an extra long hand-cuff key.

We'd been due to moor in Portland Basin Marina tonight but by the time we got out of Lock 18 it was starting to go dark and we still had about an hours cruise to get there, so after a quick phone call to make other arrangements we're now moored in Droylesden Marina. Bye for now
Posted by Yvonne at 18:52 No comments: