When we lived in the house I never bothered much with the garden. As long as the grass was cut and the perennial bushes were tidy that was enough for me. It's different here on the boat though and I really enjoy our roof garden. I know it's not very big but I always manage to grow plenty of cherry tomatoes.  This year, as well as the 3 trailing tomato plants, I've also potted up marigolds for instant colour and geraniums and lobelia which should flower in about a month. I planted the herbs and lavender when we first moved onto the boat and are still growing well 3 years later. 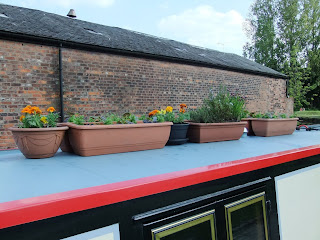 Roger screws the planters together in pairs which serves two purposes. Firstly they are more stable and don't blow over in strong winds and secondly they are more difficult to steal.  This had happened to a boat we met at Marple the other week. We bought the bedding plants and tomatoes from Asda. They have some really good deals on at the moment and all these plants only cost £16.
Posted by Yvonne at 18:09 No comments:

I thought I'd better post a blog just to prove I'm still alive and kicking.

We're still moored in Portland Basin Marina and the sun's been shining all day. I haven't got anything interesting to write about but thought I'd share a photo of today's baking session. 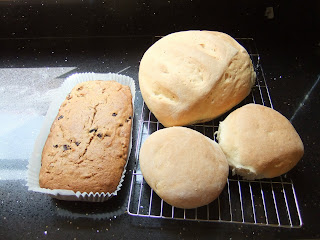 We'll have the barm cakes with home-made burgers tomorrow. If the sun's still shining we might even break out the BBQ.
Posted by Yvonne at 18:54 1 comment:

It's been a while since I've written my blog. The last dose of chemo really hit me hard so we've not done much cruising. We spent 10 days in Bugsworth Basin and bumped into quite a few friends while we were there. At one point two boats we'd built turned up, Asphodel and Dawn Owl, and it was nice catching up with their owners.

We spent the Bank Holiday weekend at Lyme Green and then made our way up the Macc. again, back to Maple where we spent a very wet and windy night before coming down the locks on Friday morning. I drove and Roger worked the locks. The rain was quite heavy at times but even in the miserable weather it's one of my favourite flights of locks. It's just so pretty. 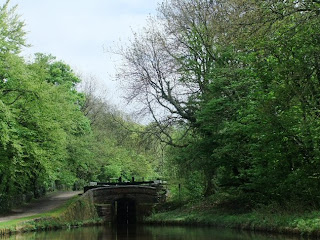 We passed three boats coming up the locks. They were helped by three volunteer lockies which was a good thing as the pounds between the last 4 locks were very low.

Before we descended lock 2 I let Chico off for a wee but he slipped as he jumped to get back on board and fell in. Lock 2 leaks so much that by the time I'd grabbed his harness and yanked him out the level had dropped by more than a foot.  He spent the rest of the journey huddled under his towel. 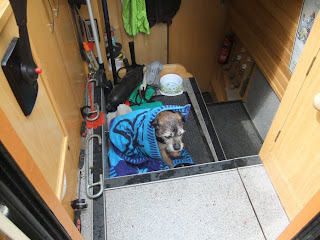 We're now moored at Portland Basin Marina and will be here for a few weeks as Roger has a couple of jobs to do in the area. As usual, we were made extremely welcome by "the Management". We've known Guy and Sandra for years, he's a Boat Safety Scheme examiner and she runs the chandlery etc.
Posted by Yvonne at 18:53 1 comment: