Hi, nice of you to drop by

Every full moon the tides in Bristol are at their highest and the harbour authority carry out their routine sluicing of the entrance lock to remove silt.  It's quite a spectacular sight and happens right beside our mooring.

First they close the lock gates at both ends. This shot is taken from our mooring so you can see how close we are. Those locks gates are HUGE and we get jiggled about a bit every time they open or close. It was a bit disconcerting the first time they moved in the night. We didn't have a clue what was happening but now we hardly even notice it. One of them squeaks loudly so that alerts us to what's going on. 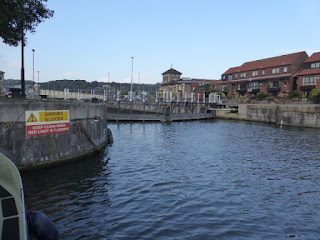 Then they empty the lock 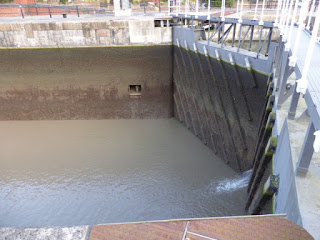 Then they open the sluices at both ends which creates a powerful undertow which sucks the silt into the river to be carried away on the next tide. The water looks like it's boiling! 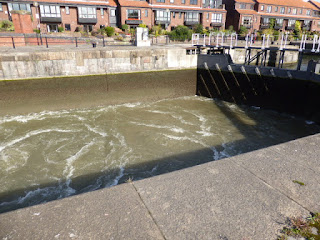 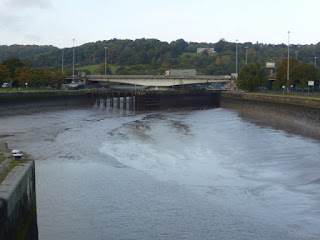 So much water is flushed through the lock that the harbour level drops by about 18 inches. 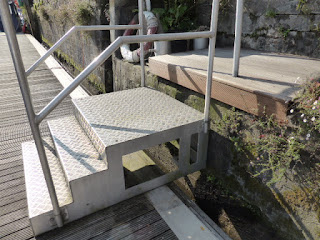 The river Severn has tides which fluctuate about 30 feet between high and low water, which means that it's easily navigable at high tide but is more of a muddy ditch at low water.  When we arrived on Fizzical Attraction from Sharpness back in June we had no idea just how low the channel actually goes. 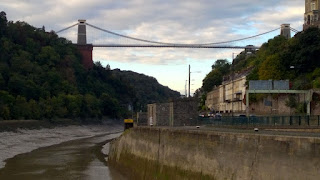 You could almost walk across in waders 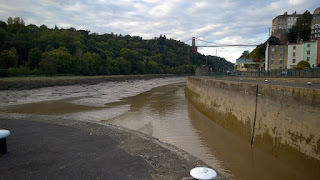 That's all for now. Take care and come back soon
Posted by Yvonne at 08:49 No comments:

Hi, nice of you to drop in again.

We've had another busy week. Roger's spent most of it down in the "cellar", which is what we've called the engine hole as apart from the engine, generator and black tank it's big enough to store lots of our non day-to-day stuff.

This is only a third of the space. 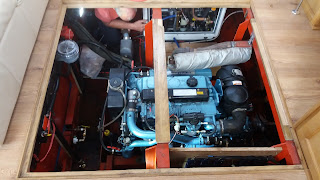 Before he could service the generator and engine he installed plenty of lighting down there. After all, there's no point struggling is there?

One other important job was to alter the steps down into the galley and bedroom.  They were a total waste of space so he used one of his new toys to cut the treads off and convert them to storage.  Of course the first one had to be the booze store. 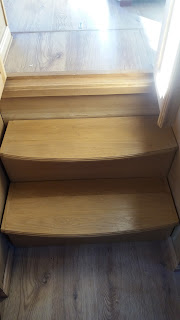 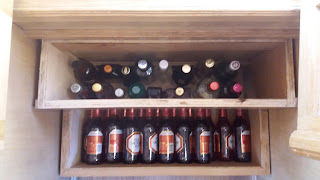 Now that's what I call "a good use of space"

We've had some interesting ships coming and going through the harbour this week. This was just one of them. The Pride of Bristol is an ex navy ship that moors in the harbour. The other day she came and moored at the pub opposite us, complete with wedding party on deck supping champagne. They disembarked and went ashore for a while before returning in groups for trips around the harbour. Someone obviously wanted a stylish wedding! 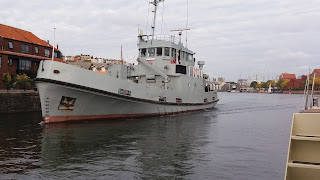 Today we had a trip of our own.  When we moved on board we didn't know how full the waste tank was as there isn't a gauge like we had on Fizzi, although the broker told us he'd taken her for a pumpout so we assumed it was empty. Today we realised it was full. I won't go into details as to how we found that out but let's just say that our maiden voyage had to be brought forward.....quickly.

So off we went up the harbour to the pumpout station.  Bluey handled beautifully, much better than when we had our test drive and thanks to works done while she was out of the water. 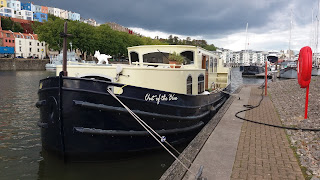 It now feels like we live on a boat again, rather than a floating apartment.  I can't wait till all the works are done and we can go cruising again. 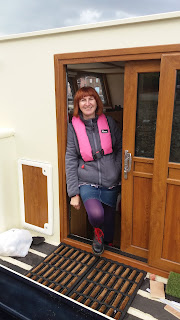 Bye for now, see you soon I hope

Hi, nice to see you again.

It's been a busy week and for most of it I've been firmly attached to my trusty grey bucket.  Note to self "NEVER buy a boat that's been moored under a tree for the past year!" 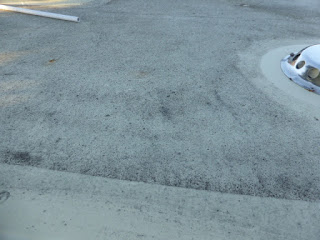 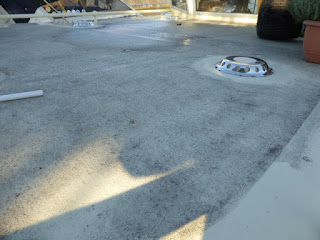 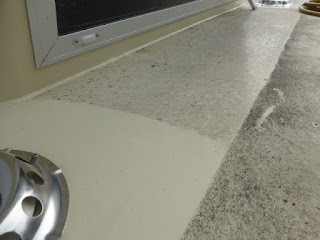 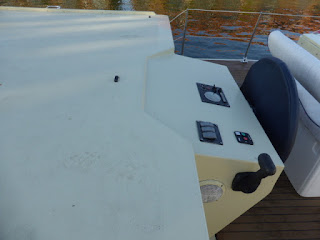 Every inch of the boat has now been washed and/or scrubbed, but polishing will have to wait as there's a lot of rust spots that need treating.  It's a real shame that it's been neglected for so long that the rust has set in but we've decided that this boat won't be a "shiny boat" like Fizzi. There's just so much surface area to keep clean and polish that we'd never have time for anything else, so as long as it's clean that'll have to do.

Roger's had a busy week as well. He's finished the kitchen, reconfigured the heating pipes to get the Webasto working properly and put up the roller blinds. He's also ripped out the dodgy toilets and installed nice new ones. The communal facilities here on our moorings are really nice but there's nothing better than having your own loo is there?

It's not been all work and no play though. We've managed a trip on the ferry into town for a bit of shopping and had a nice meal out at The Cottage pub just across the marina.

We've been sitting out on the deck this afternoon taking in the sunshine and watching the world go by and with views like these I can really understand why there's a huge waiting list for residential moorings here in Bristol. 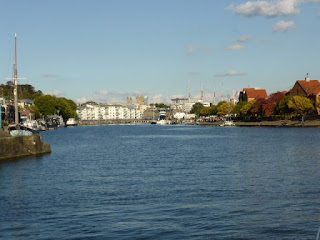 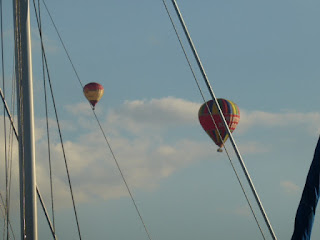 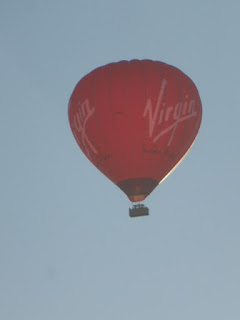 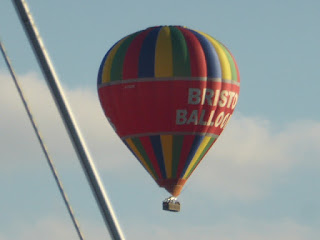 That's all for now, have a good week and I'll see you soon.
Posted by Yvonne at 17:44 No comments: