We're really happy with our new double glazing. Not only has it stopped any condensation on the windows, it's made a HUGE difference to the outside noise levels. We have lovely neighbours here in the marina but their heating exhaust is right beside our saloon and it's quite noisy. Not any more though, now we hardly even notice when it's running. The noise reduction also works the other way too, Roger can turn up his electric guitar without disturbing them either.

Although we mainly fitted the DG to reduce the condensation on the windows we've noticed a huge difference in temperature inside the boat. We now only need a very small fire and we've used one full bag of solid fuel less than usual this week. If this carries on  it'll pay for itself in fuel savings by the end of the winter.
Posted by Yvonne at 15:48 1 comment:

One of the benefits of being in a marina is that Roger has had time to catch up on all the little jobs he's been meaning to do for ages. Top of the list was to fit secondary double glazing and after lots of research he finally came up with a cheap(ish) and simple method which has worked brilliantly.

For those of you who don't live on boats, the main problem in winter is condensation on windows and their aluminium frames. 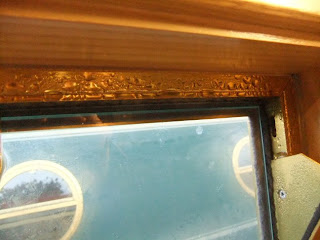 Every morning my first job would be to wipe up the puddles on the window cills before they could soak in and discolour the wood. 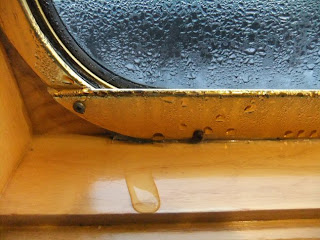 You can see in the large photo of our boat at the top of the blog that we have LOTS of BIG windows and the heat loss on very cold nights was quite considerable. In previous winters we've put silver insulating foil behind the venetian blinds at night and that worked really well but didn't stop the condensation or the heat loss during the day. Plus we had the nuisance of where to store 7 large pieces of insulation during the day.

Roger's system is made up of 3mm clear acrylic sheet face fixed around the window by double sided magnetic tape and as you can see it works brilliantly!

It was -3' this morning and there wasn't any condensation on the 6 windows we've done so far. We weren't sure whether to do the kitchen window or not as I like to have the top hopper open while I'm cooking, but as you can see in the photos above this window was dripping heavily this morning and that's made the decision for us. The magnetic tape makes it really easy to put up/take down the DG so I'll just take it down and put it on the bed while I'm cooking. 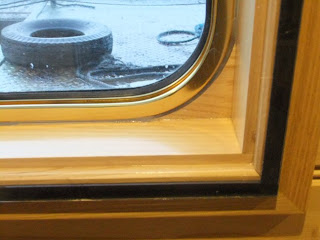 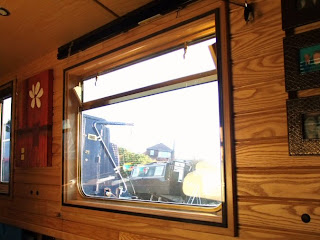 I said the job was cheap(ish) and in total it's cost us just under £150 for the 7 windows.  That included having the acrylic cut to size and delivered to Macclesfield.  If anyone wants more details feel free to email me.