We've had a bit of excitement this week with the arrival a new grandson.

Although he's our third grandchild he's the first one to carry on the Olver name and we can't wait to meet him next week. Isn't he gorgeous? 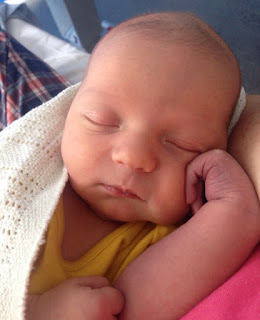 He looks like he's going to be a pretty laid-back little chap.
Posted by Yvonne at 18:49 2 comments:

We've been away to France for a couple of weeks house sitting for friends of a friend. It was all very short notice as the original house sitters had to drop out at the last minute due to family problems. The boat went into Milton Keynes marina, Chico went into boarding kennels and we flew off to Toulouse. Unfortunately I forgot my camera so I appologise if the photos aren't quite as good as usual.

We spent the first night in a Chambre d'Hote (B&B) in the village of Lectoure. It was gorgeous, 16th century with many of the original features and timbers and built around a courtyard where we had breakfast of fresh croissants and home made preserves. "Madame" didn't speak English but I quickly found out that my French isn't as rusty as I thought. 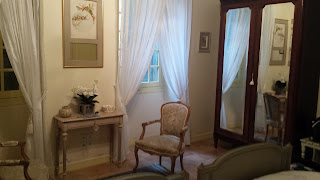 The next morning we moved into the house which was a couple of miles outside Lectoure. Our main job was looking after the dog Doogal 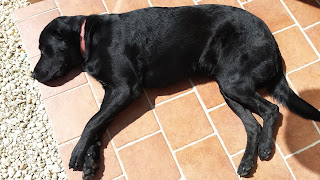 and the cat Tigger 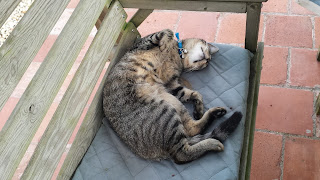 The house was exactly what we'd intended buying ourselves years ago, but our kids weren't interested in moving to France so we never got round to it. 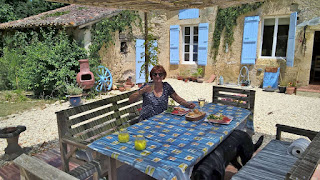 The gardens led directly into a field of sunflowers 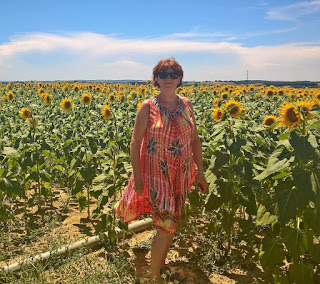 and were well stocked with fruit trees 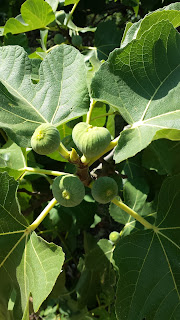 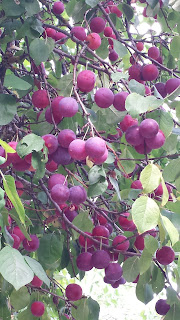 and Damsons amongst others 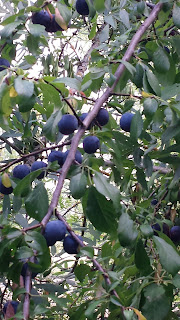 Most days we went out exploring in the hire car. It's one of the least populated regions of France and the villages and towns are really old and quaint 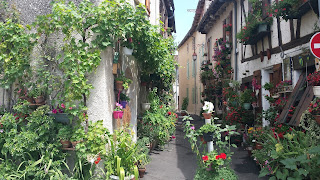 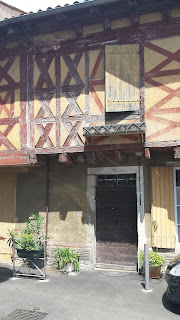 We'd have lunch in one of the many small local restaurants we came across. Three courses including wine and coffee for 13 Euros from the Menu du Jour - which worked out at about £10 each. You don't get a choice but the food is usually excellent, the trick is to go to the one which is full of locals. Unlike Paris and the larger towns and cities, we found the locals to be extremely friendly and although they usually didn't speak English this was one of the main attractions for us and we managed very well.

In the evenings we'd eat back at the house under the "Tequilla Shack". Roger made good use of the BBQ cooking everything from this Cote de Boeuf to sardines and chops. We certainly didn't go hungry! 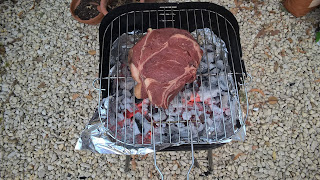 I knew we'd never manage to stay away from the water for a full fortnight and one day we came across the beautiful town of Nerac which is one of the stopping places for hire boats on the River Baise. There was also a British wide-beam there called "A L'eau A L'eau" 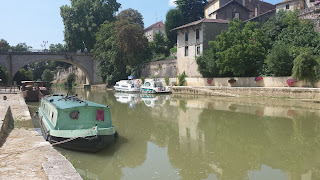 The lure of the river was too much and we succumbed and rented an electric boat for an hour. 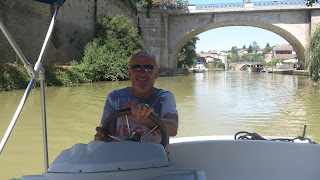 Another day we went to Agen where we came across this boat with a for sale sign in it's window so I phoned up and arranged a viewing. It was originally built in 1888 but had recently been fully restored and modernised. It was beautiful and a bargain at 120,000 Euros and although it had good outdoor living space, a nice kitchen and two large bedrooms, the bathroom was extremely basic and there wasn't any real indoor living space. It would be perfect as a holiday boat but not big enough for a full time live-aboard. 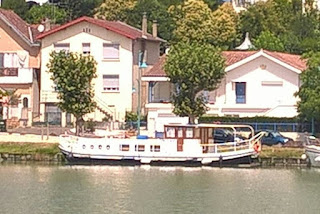 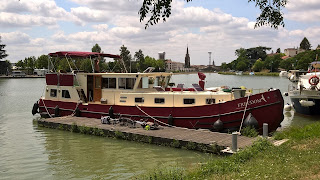 It is our intention to move to France, but we haven't decided whether to take our narrowboat or buy a bigger boat. I want the luxury that we already have but combined with more outdoor living area. Better buy another Lottery ticket or two..................

The wildlife around the house was varied and interesting. Doogal regularly chased, but never caught, a huge hare and we were treated to aerial displays by the resident bats every evening. The spiders were large and fast and there were also several of these Humming-Bird Hawk moths which arrived to pollinate the flowers as it was cooling off in the evenings. 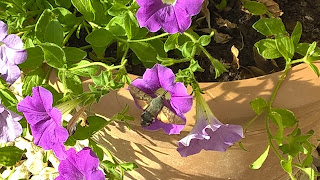 On Bastille Day the village of Lectoure celebrated with an evening meal in the town square followed by fireworks. We worked it out and there were about 1400 people there, all being fed over the course of 3 hours. Again it was 3 courses including foie gras and duck confit with wine for 13 euros. Back in England you'd be lucky if you got a burger and chips from a greasy spoon van for that. 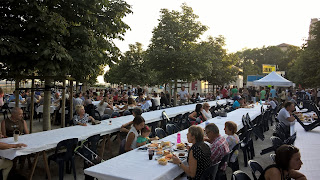 We visited lots of markets 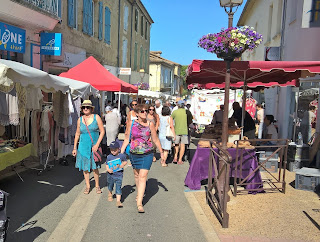 and it's surprising just what you can buy on a French market these days. It isn't just fruit and clothes as you can see 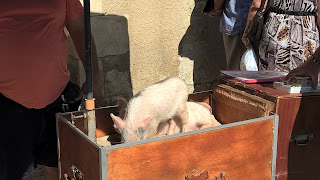 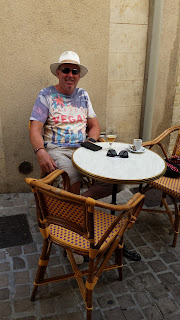 The fortnight passed far too quickly and we flew back home on Thursday. What a shock to the system that was, arriving back to 13'C and torrential rain on Friday.

Our normal travelling life has been resumed, so unless we have any more last minute travel "forced" upon us you'll have to make do with tales from the Grand Union and the Thames for a while.