Our Floating Life is back underway

It's official.....I detest Windows 10!  Every time I get my laptop out to write a new blog the b****y thing needs to update itself . It's just taken over 45 minutes to update and reboot, good job I didn't need to do anything in a hurry.

Oh yes, I was going to tell you that we're now back in the water again having been craned back in on Friday morning.  The prop shaft works are complete, along with some new structural steelwork that I'll tell you about another time (I forgot to take photos and it's dark now). We've fitted a Prop-Protector the same as we had on Fizzi so hopefully we won't need to go down the weed hatch very often. The weed hatch had to be extended upwards by about 4" as the boat builder hadn't thought about what level the water would come up to when the boat was fully laden with furniture and personal belongings and it was almost up to the top.

We hired a car last week and drove to South Wales to buy an anchor as the original one was missing.  I dredged back into the memory banks to when I used to be able to splice ropes in my sleep and (with the help of Google)  managed to come up with a pretty decent join between the chain and rope. 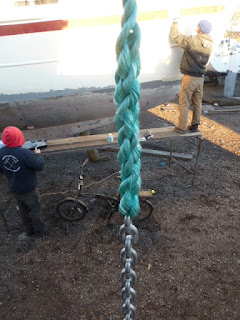 Rob the engineer came with us for a sea trial around the harbour to make sure the new prop shaft was properly sealed. The difference in boat handling without that bent shaft is amazing. It's now beautifully smooth and turns on a sixpence.  This boat is definitely jinxed though. No sooner do we solve one problem than another one appears and the generator packed up so we were back to needing a landline hook-up.  It's a good job Roger is a marine engineer and could fix it himself, once he found the fault that is. The hardest part was locating a new oil pump locally and by lunchtime on Saturday we were up an running independantly again.

When we first looked at Bluey it didn't have any CE certification of any kind as the builder "doesn't believe in all that" and the original owner had to keep the boat until it was 5 years old and could be sold without any paperwork. Part of our pre-purchase offer was to insist that it was fully inspected and post-certified so that we wouldn't have any hassle taking it over to France. The certification inspection threw up quite a long list of uncompliances but the vendor agreed to put them right at his expense. These works have now been done, although having waited weeks for the engine fire extinguisher system to be designed and made when it finally did arrive it was wrong.  This was something the broker was arranging on behalf of the vendor and not specified by us, so now they will have to come and find us when it has been remade and redelivered.

They'll have to come and find us because we're finally leaving Bristol tomorrow morning. We'd booked to go out from Bristol lock on Tuesday but the pilot phoned us yesterday to bring our trip forward by a day. This is due to the weather being so settled at the moment and also because there is a lot of commercial traffic later in the week. They said if we don't go now we may not get such a good weather slot again for a long time.............and we've had enough of Bristol now.

So, fingers crossed that nothing else goes wrong, next time I blog we'll either be in Portishead or on the Gloucester & Sharpness Canal.

Come back soon to find out where.

I hate 'Windows' too. I now use a Chromebook and although it can't do everything a windows pc/laptop can do, for browsing internet and doing a blog it is great. Boots up in under 10 seconds everytime and doesn't require anti virus software. All for around £150.

Bluey is looking good - look forward to reading your adventures on her.