Friday night and early Saturday morning saw a posse of volunteers (mostly dodgy looking local kids which shows you shouldn't judge by appearances) do a fantastic job of cleaning up the litter and transforming the festival site ready for the official kick-off at 12.30.

We’d taken the dogs for a walk around the site in the morning just as all the stalls were setting up and before the crowds arrived. There were craft stalls selling hand-made jewellery & hand-made mugs,  vintage clothes, henna tattoos and hair braiding and an assortment of the usual charity ‘tat’ stalls. The food stands did a roaring trade and for once it actually smelled really nice. There were gourmet burgers, without the usual overpowering aroma of fried onions, Jamaican and Indian food, the ubiquitous doughnuts and a stall selling up-market alcohol free cocktails. Over in the park the crowds were having a really good time with happy smiling faces everywhere. There was a real ale beer tent with live acoustic entertainment, various children’s entertainers wandering around, free craft projects for the kids to get involved in, owl and falconry displays and much more besides. There was something for everyone and the event certainly pulled the crowds in.

We went to watch the SOS Blues Band on the main stage at 1.30. They're a local band who played blues and rock& roll and were AMAZING!! 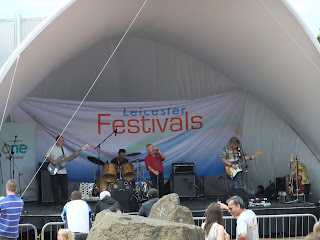 A few of the local alcoholics were boogying with the kids and having a great time. I’m pleased to say that everyone we saw was well behaved and the security, which was there in abundance, didn’t seem to have much to do.

Down on the river there were lots of activities for the public. Boat trips provided by 3 day boats from Sileby Mill Marina, canoe and kayak hire and displays of stunt canoeing and coracle handling. One group had made a boat from recycled pop bottles stuck together with “no-nails” glue which floated and lasted quite a while before it began to break up.

At 5pm we joined in with the boat procession which was led up and down the river by the Bill Bailey Jazz Band, riding in the (emptied) rubbish boat. They played some rousing music and the gongoozlers (non-boating public) seemed to enjoy the spectacle with much clapping and cheering as we all went past. 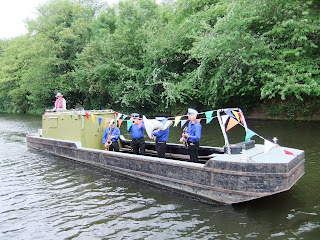