Back on the Macc.

We made it back up Marple Locks today without any real problems. Water levels in some of the pounds was a bit low which meant we had to let some water through, but it was nowhere near as bad as when we went down back in October.

The locks are due to close tomorrow for maintenance and it looks as if work will start on time as the fencing has arrived for Lock 8. 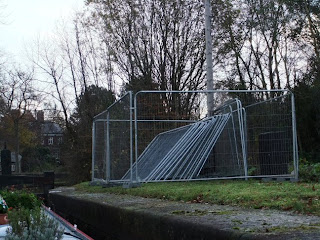 There were lots of walkers out today, making the most of the sunshine and we had "gongoozlers" at every lock.  Of course there were the usual questions; "do you live on your boat?" "is it cold?" "have you got a TV?". Several men were intrigued  with the mechanics of how a lock works and one little boy ran up to the lock and shouted to his mum that there was a ship in the bottom of the lock. He was very disappointed when we got up to his level and told his mum "it's not a ship, it's only a little boat".   Roger got talking to one couple and told them about C&RT hoping to get donations from walkers to help with maintaining the towpaths etc.  They were horrified and stated quite categorically that they wouldn't pay as it should be free to go for a walk!

This was the view from the top lock. 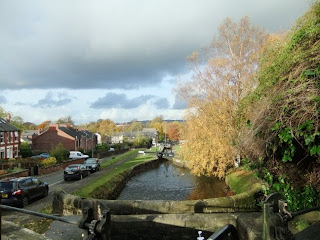 The moorings in Marple were full of the usual lurkers. If they have to lurk why do they have to do it on visitor moorings, why can't they do it out in the countryside?  One boat which is now on the visitor moorings used to moor permanently in Castlefield but as they've recently had a clear out it looks like he's come up to join the other "bridge hoppers" here on the Macc.

We managed to double-breast with a boat that we've met a few times before while we went to the Ring O'Bells pub for a late Sunday lunch.  The food's really good there. Roger had roast pheasant and I had slow roast belly pork with superb crackling and a black pepper and brandy sauce.  Both were served with 5 large portions of veg, roasties and boiled potatoes and was just what we needed after doing the locks.  We carried on again after lunch and got moored up just before it went dark at Hawk Green. We'll carry on again tomorrow.

I totalled up the log today. So far this year we've travelled 891 miles and done 698 locks our biggest yearly total. I'd like to make it to 1000 miles by the end of the year but think that may be a bit optimistic.  We'll see.
Posted by Yvonne at 18:19