On Wednesday when we were coming up Lock 91 on the Rochdale Canal Roger noticed that the ratchet on one of the top paddle gears was loose and working it's way off the spindle ready to fall in the water, so he phoned the local C&RT office to report it.  By the time we'd left the lock and arrived at the next, no more than 15 minutes, the maintenance guys had arrived to fix it! We've had fast response from C&RT  to other maintenance problems this year so I'd urge you to report anything you come across.  After all, if they don't know there's a problem how can they fix it?

Yesterday we left New Islington Marina, dropped back down the 2 locks on the Rochdale canal and then Roger worked us up the 18 locks of the Ashton Canal.  We didn't have any problems apart from low water in the top 3 pounds. This had been caused by a convoy of 5 Claymore hire boats coming down the locks on their way back to their base at Preston Brook. The pounds hadn't had time to recover from having 5 lock-fulls of water taken from them in rapid succession so we just let some down to raise the level a couple of inches to stop us dragging on the bottom.

We're now moored in Portland Basin Marina again and will probably move again tomorrow ready to go up Marple Locks on Sunday before the winter stoppage. 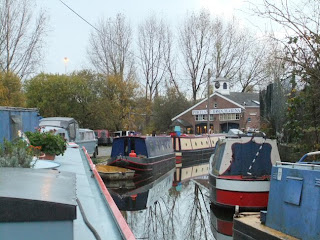