After another late start yesterday, we continued on our way to Boothstown on the Bridgewater Canal.

Here's a photo for all you football fans. There are mooring rings a bit further on but these are restricted to water taxis which operate from Manchester city centre on match days. It's certainly not anywhere we'd like to moor as neither of us like football! 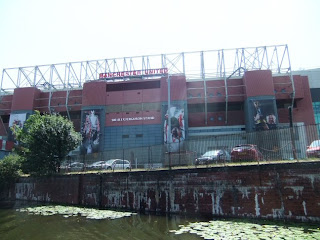 At Waters Meeting we turned right onto the Leigh Branch, cruised through Trafford Park, past the Trafford Centre and arrived at Barton Aqueduct to find a boat half way across. It's the first time we've ever met anyone here but was unsurprising as there were a lot of boats on the move yesterday. 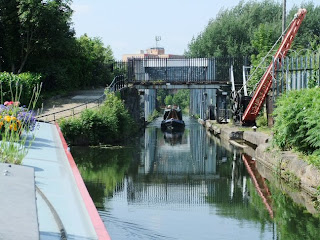 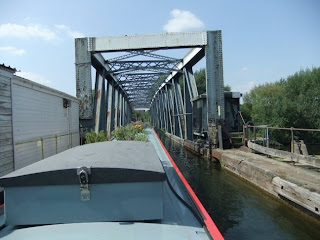 Barton Aqueduct carries the Bridgewater Canal over the Manchester Ship Canal. This is the view looking towards Salford. 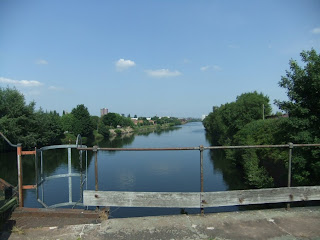 and this is the other way, looking towards Irlam, with the road swing bridge and M60 Barton Bridge (which is always on the traffic news as it's a major accident black spot) in the background. 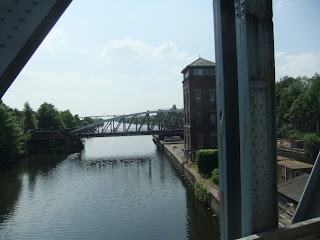 Once you get across the aqueduct the water becomes crystal clear and there are water lilies everywhere. We watched hundreds of fish swimming about and even saw a 2 foot long pike basking in the shade. I would have taken a photo of it but I was too busy eating an ice-cream. 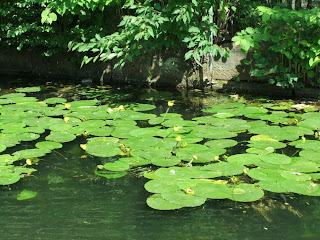 The majority of boats moored along this stretch at Patricroft have window guards. It's not the most salubrious of areas. 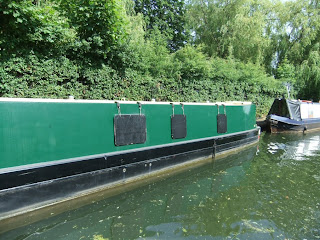 It's also not a good idea to use twin wall polycarbonate for home-made window guards as they just fill up with mould which grows on the condensation......YUK! 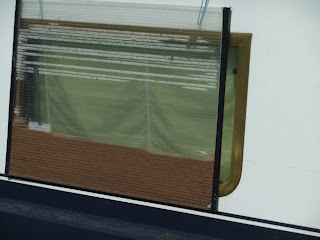 This was the first swan's nest I've seen this year, which is hardly surprising really as we haven't done any cruising. The cygnets seemed extremely young for the time of year. 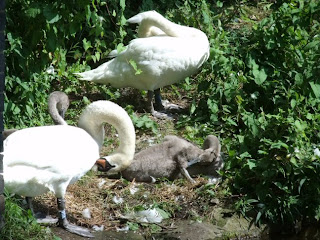 Further on we arrived at Monton which is where we lived when we were first married. This was our house. Back then there was a huge mill on the opposite bank which used to get regular deliveries by canal on the Cowburn & Cowpar boats. The mill was demolished 20 years ago and has now been replaced by a housing estate. 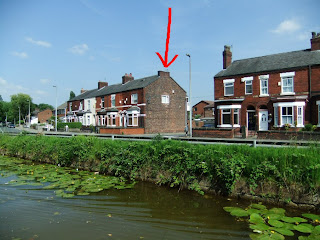 This is the Monton Turn Lighthouse. It was built by a local eccentric and the light actually used to work. The building on the right is the local health centre. 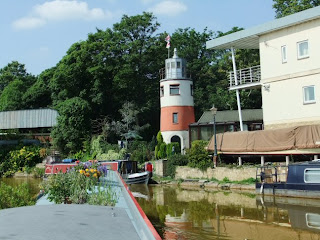 This is Worsley Village, probably one of the most photographed villages on the system.  The opera singer Russell Watson is reported to have lived in one of the units in the building on the right. 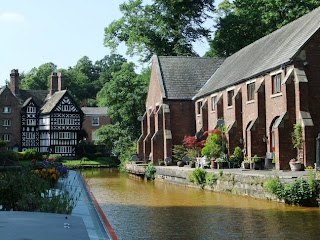 So this is our home for the next 4 weeks while I have my radiotherapy at the local hospital. We're hoping to get some cruising done but as treatment is every day, 5 days on 2 days off, that may prove to be a bit optimistic. 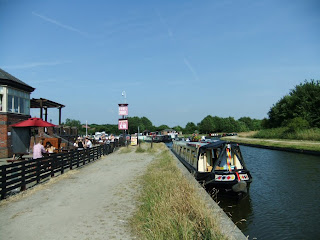 It's typical of the Bridgewater Canal that boats NEVER slow down for moored craft. They seem to think that because the canal is deep and wide their wash won't have any effect......wrong! One boat went passed so fast this morning it snagged the lines of a couple of the local fishermen who weren't best pleased. The woman steering gave them such a mouthful it made me ashamed to be a boater!
Posted by Yvonne at 12:31

Yvonne, so lovely to see you out cruising again.
Do they cover their windows to prevent breakage is kids throw things??
All the best for the next stage treatment.
Elly