We'd planned to stay in Gloucester and explore the city, but the weather was so nice we decided to pop down the Gloucester & Sharpness Canal and see what was at the end.  It was a good decision as it's a beautiful canal. Unfortunately we could only stay one night but there's so much to see and do that we've already decided we'll have to pay a return visit next year and maybe stay for a few weeks.

There are 13 swing/lift bridges on the canal, all of which are operated for you by very pleasant C&RT staff. 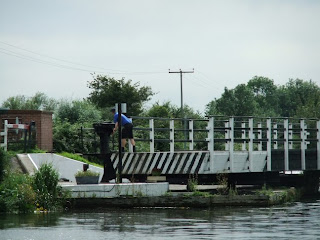 The canal was originally built to take large ships, bringing cargo from the port at Sharpness in the Bristol Channel to Gloucester Docks.  Because their passage was dependant on accessing the tidal lock at Sharpness the bridges had to be manned day and night and the bridge-keepers lived in these small cottages beside the bridges.  They're unique to the G & S canal and all feature classical facades with fluted Doric columns. These days they're all privately owned and almost half of them were for sale. 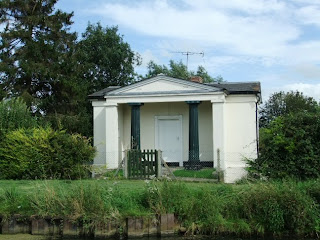 We moored at the end of the canal, with good views over the Severn estuary towards the Forest of Dean. 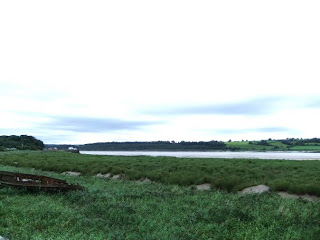 The River Severn has the second biggest tidal range in the world and it certainly comes in quickly.  We went for a wander around and in the space of half an hour the sand banks were covered.  The currents are fierce and there were lots of whirlpools too.

This is the old tidal lock at the end of the canal which is no longer used. 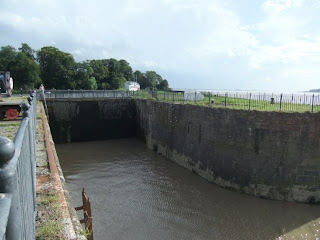 I saw my ideal boat in Gloucester Docks and Roger found his while we were walking round Sharpness Docks.  It even has it's own heli pad but we couldn't decide if it was still being fitted out or was in the process of being dismantled. Either way it looked like it needed a lot of T.L.C. 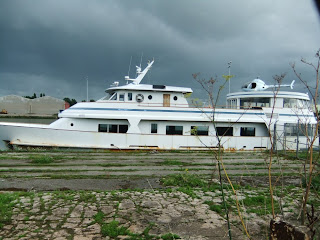 Just up from our mooring was the remains of an old railway bridge which used to cross the River Severn. 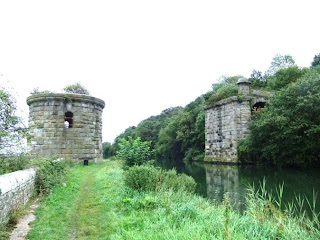 The tower on the left was the pivot for the section of railway over the canal which had to be moved to let large ships past. 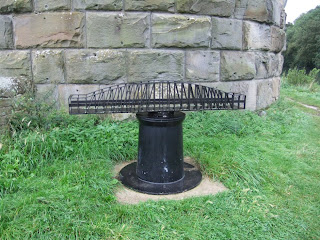 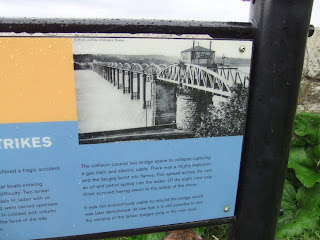 Yesterday we headed back to Gloucester but stopped at The Tudor Arms pub for a pint at lunchtime.  This pub has been awarded CAMRA's Gloucester Country Pub of the Year award for the 6th year running so we just had to stop and see why. The beer was excellent, the menu fairly basic but the food looked good and they had a poster in the bar that made me smile. 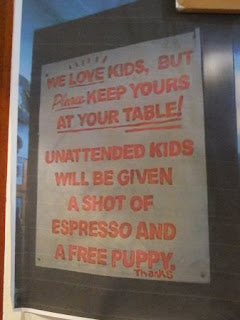 We set off again, stopping twice en-route.  The first time was to get a pump-out at the day-boat hire/cafe just through Patch Swing Bridge.  It was only £10 (BW charge £14.75) with use of the pump for as long as you need and a good rinse out too.

The second stop was at the oil depot between Fretherne Bridge and Sandfield Bridge.  They sell red diesel at 85p/l domestic rate with any split, direct from the depot. In winter they also sell solid fuel. 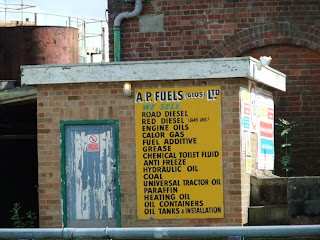 We just made it back to Gloucester Docks with 5 minutes to spare before Llanthony Bridge closed for the night.  The docks were very quiet with only 3 other narrowboats on the moorings.  We left at 12.00 today, having been advised by the lock keeper to wait for the low tide on the River Severn to make it easier getting out of the lock. The River Severn is quite boring really, although going up-stream there seems to be a bit more of a view than going down-stream. It's definitely just a transit river, I wouldn't want to spend any time here. 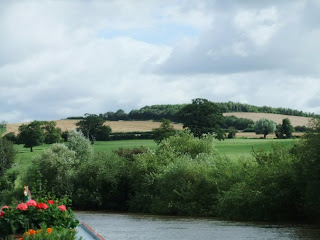 At Upper Lode Lock we shared with a huge crane. They were repairing one of the paddles in the lock but had had to abandon work for the day due to high water levels. The weir beside the lock was almost level but we didn't really notice much of an increase in current. 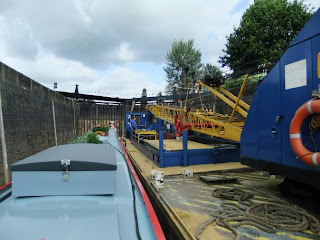 We're now moored back in Upton on Severn, double breasted up on the floating pontoon.  We didn't fancy mooring on the steps under The Plough pub as the water level is rising quite rapidly at the moment, I suppose that's due to all the rain they've been having in Wales for the past few days.  I just hope it doesn't go up too much overnight as we really need to carry on again tomorrow. We have to get back to Birmingham by next Thursday.
Posted by Yvonne at 19:21