Yes, I know I said we wouldn't be coming back here for a long time, but it's been SO windy today we didn't want to go any further.
The party at the marina yesterday was OK, if you could keep the food from blowing off your plate and keep the dust out of your drink! It was blowing a gale, in fact it was so windy that when I took the dogs out later Charlie nearly got blown off the pontoon. It's always very windy at Macc.marina but this was just awful. I abandoned the party early as it was too cold for me but Roger stayed and said they had a great time later in the evening when the guitars came out for a jamming session. Mel joined in singing, with Roger, Kev & Gary on guitars. 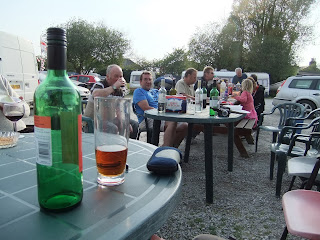 It's still extremely windy and even with 3 ropes, 2 on mooring rings and 1 on a mooring stake, we're rocking and banging about. I've just checked the weather forecast for tomorrow and unfortunately it says it's going to get even windier so maybe we'll stay here another day.
Posted by Yvonne at 18:10