When we first notified our insurance company of our intention to cross The Wash they imposed specific conditions that we tape up all external vents and vulnerable windows, so apart from the scuppers, that's what we did. 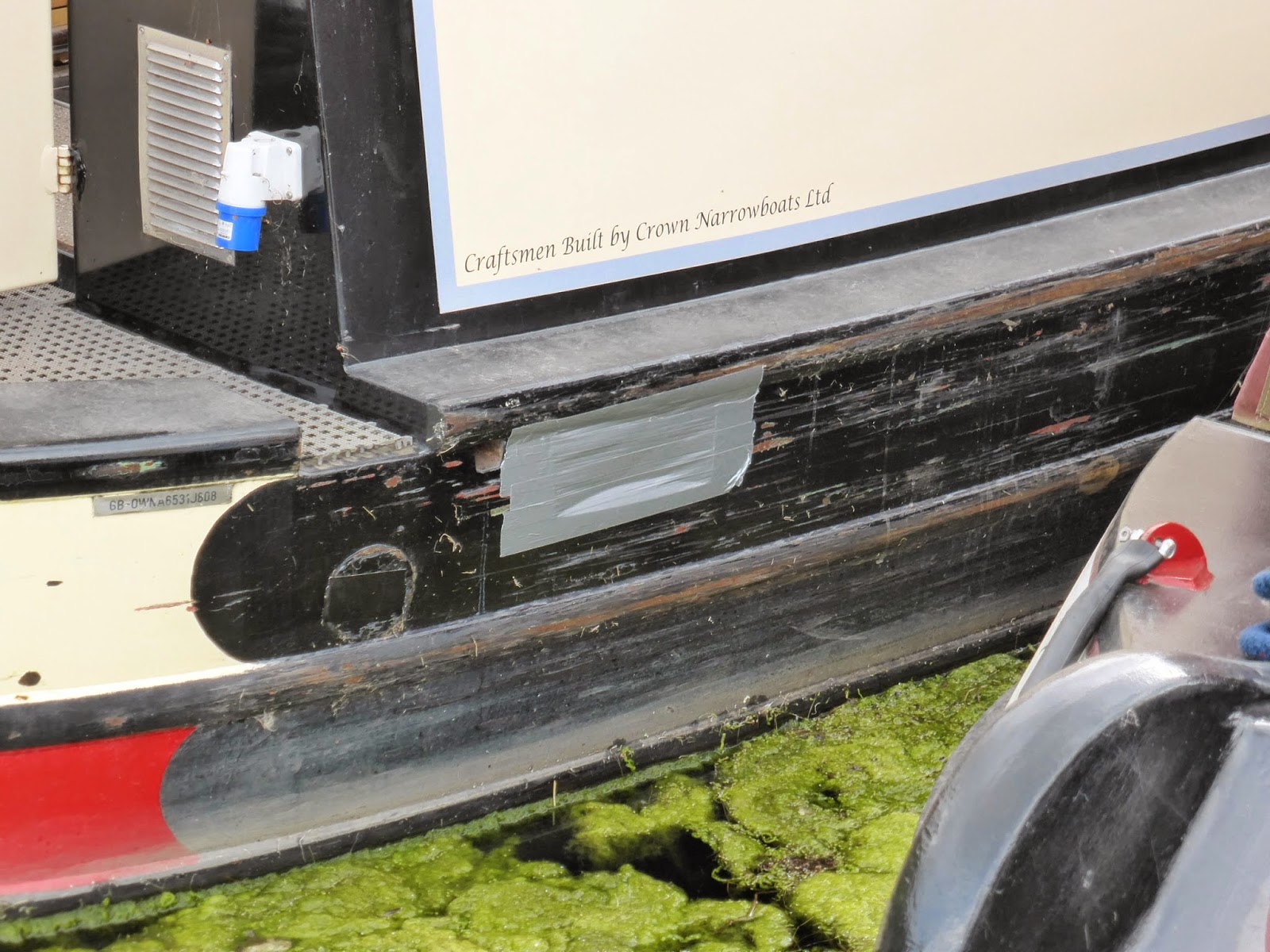 All our windows have rubber seals apart from the side doors, so we taped them up too, just in case. 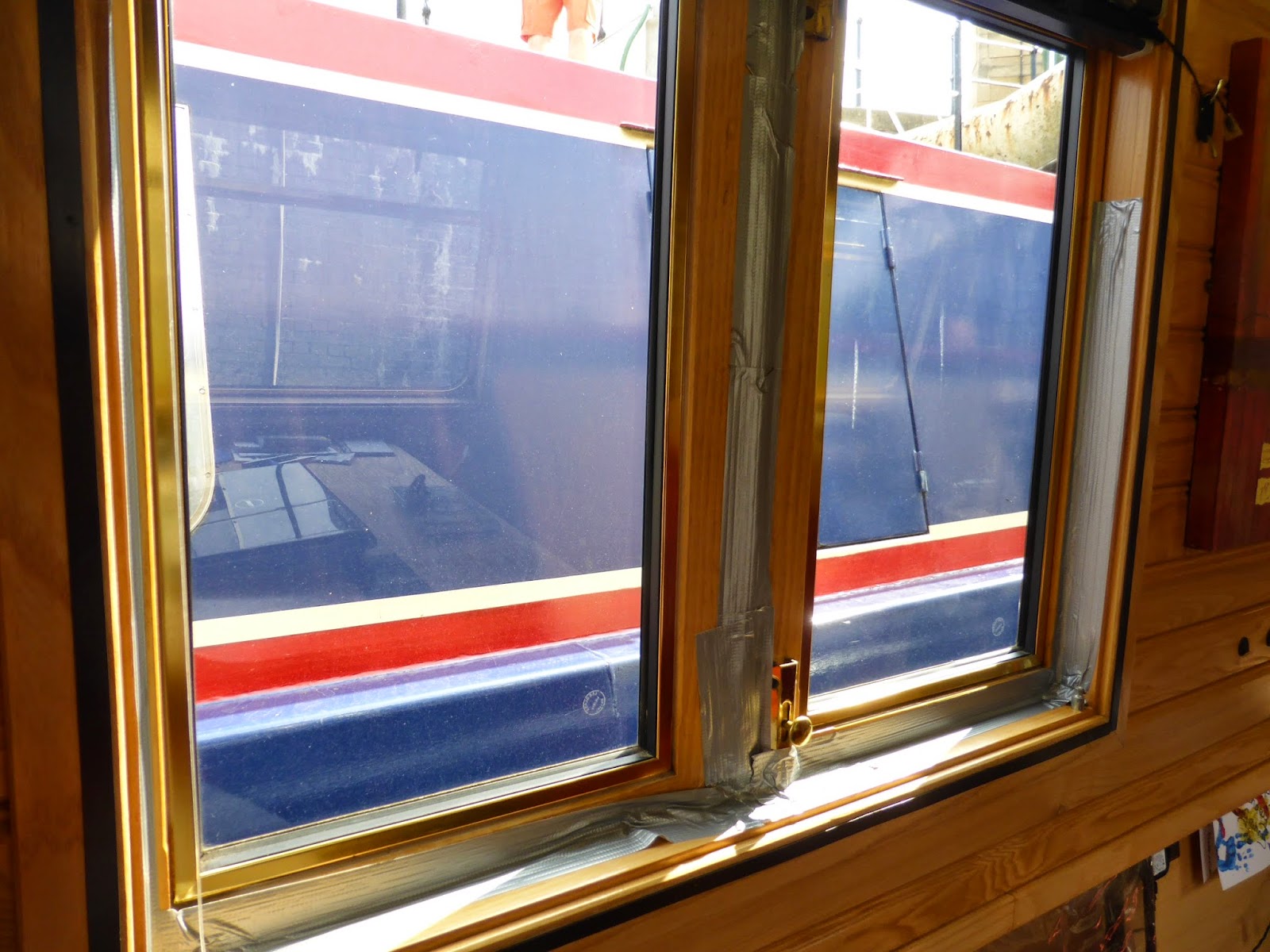 By 10.30 we were all assembled in Boston Grand Sluice Lock waiting for the tide to come up the river so that they could open the lock gates at both ends and let us out. The Cotswold's Canal Cruising Club colours are orange so most of us wore something orange, even though it's not the most flattering of colour. The guy in the front of the picture wearing the blue hat was our chief pilot Daryl and he was in the lead boat. We also a second pilot on one of the middle boats and a third on the last boat. 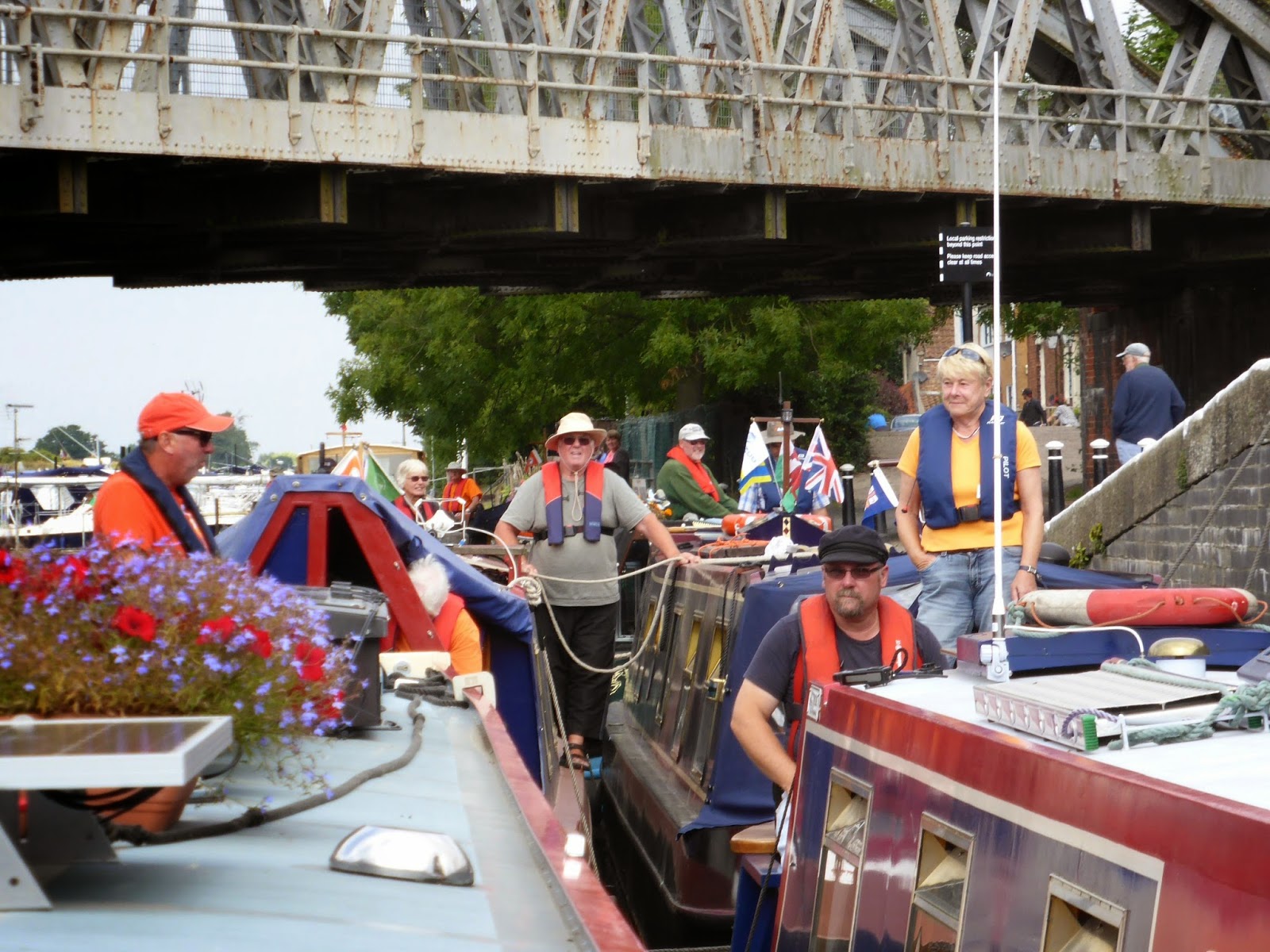 Everyone was chomping at the bit to get going so when the lock gates opened we made a dash for it. There was a very short window before the tide started dropping and the gates would have to be closed behind us, but we all made it through and headed off down the River Witham towards the sea. 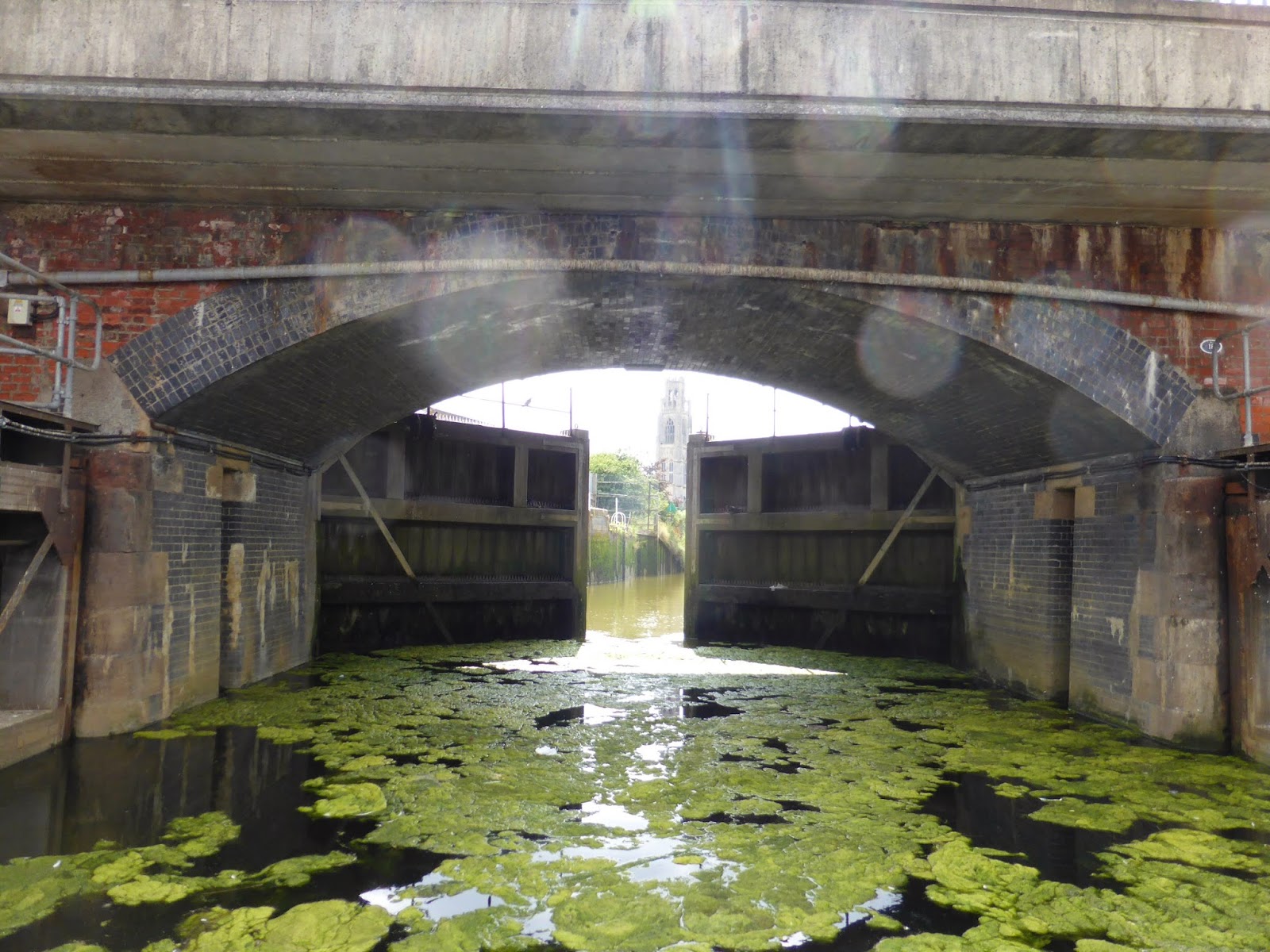 Once past the iconic church we entered the Port of Boston where business was carrying on as usual, although many people were amazed to see 8 narrowboats whizzing past in convoy and workmen stopped to wave at us. 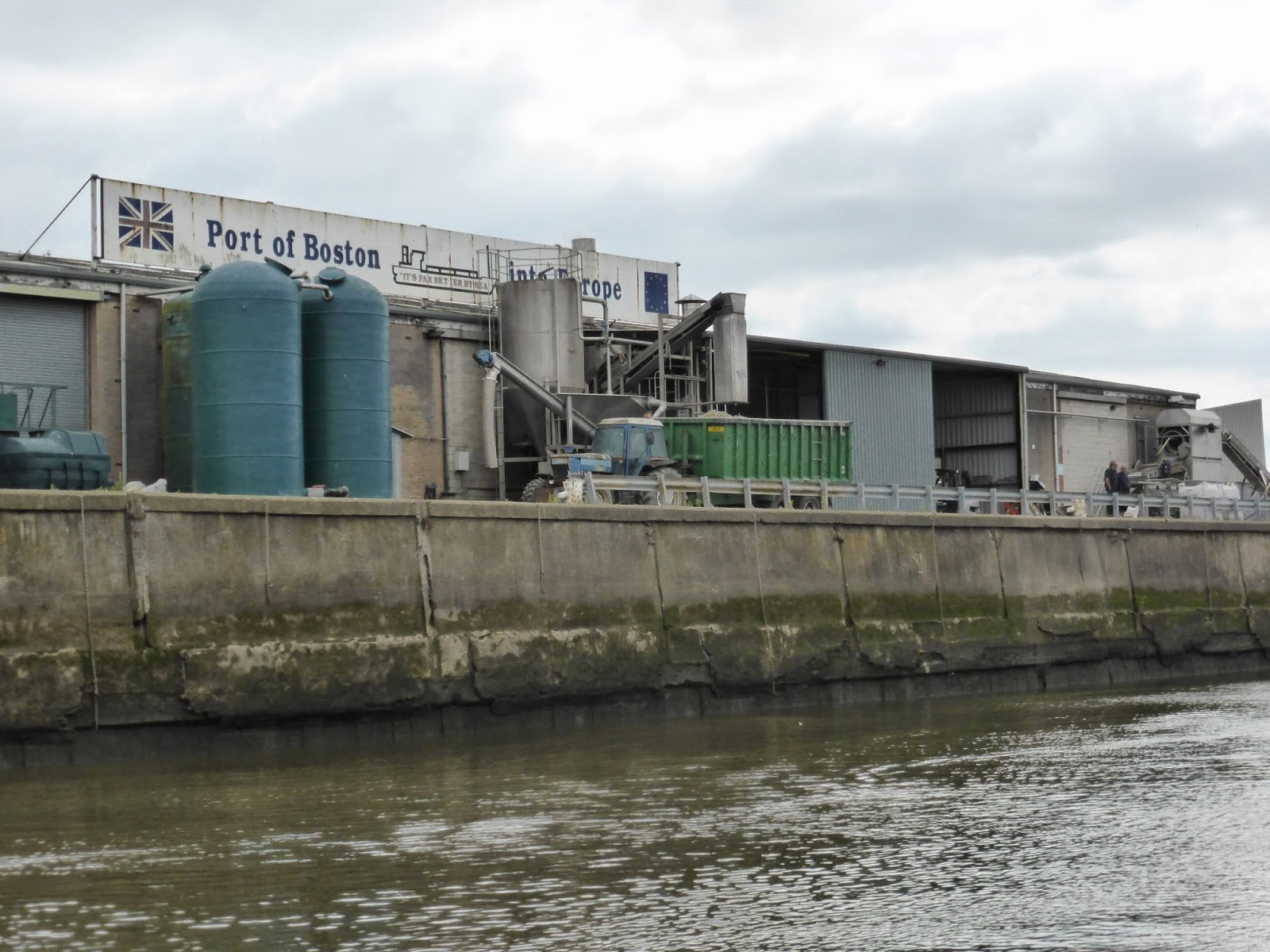 We felt like small fry compared to this commercial ship, even though in the scale of things it was relatively small itself. 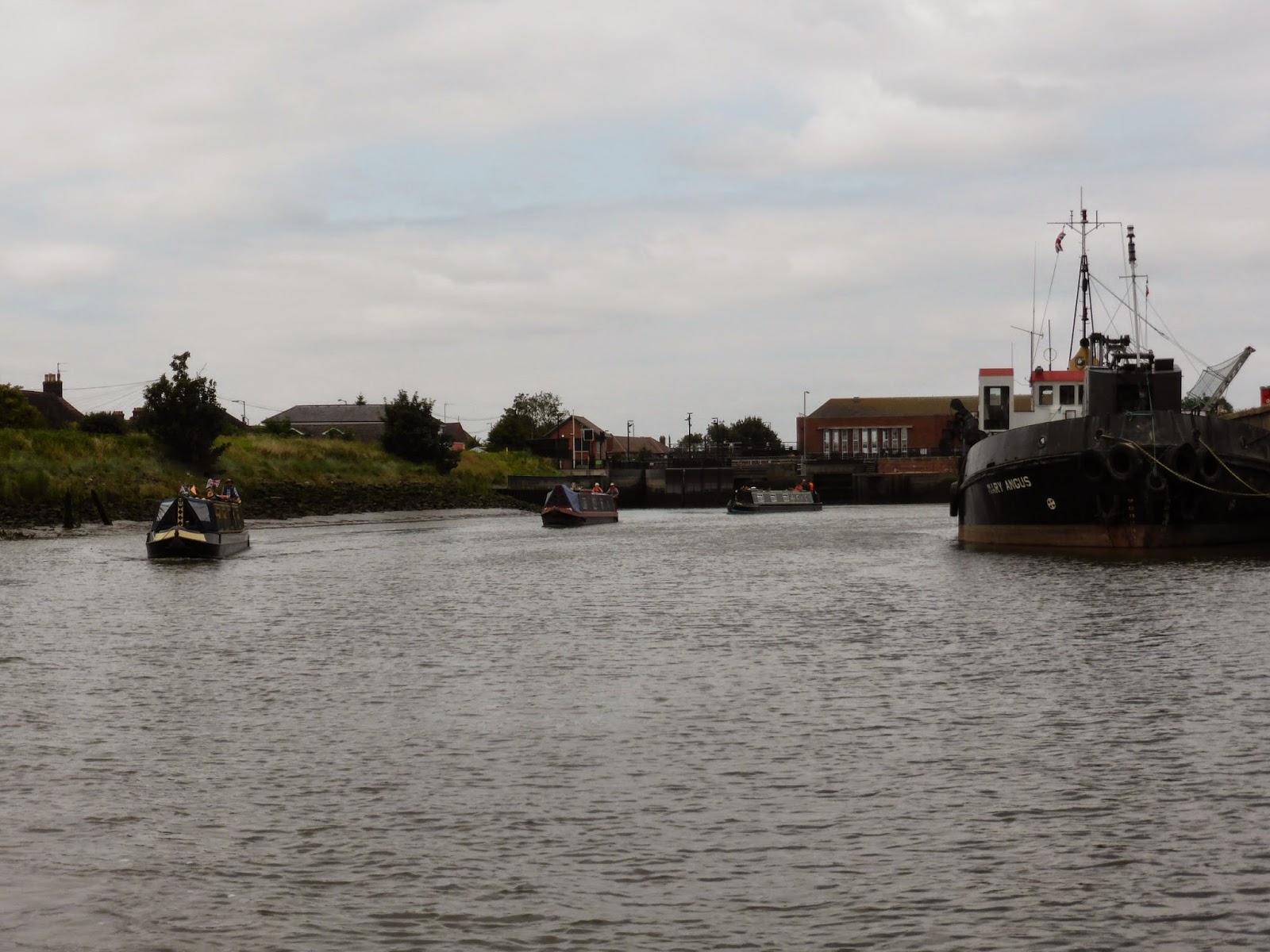 The tide dropped fast, taking us with it out towards The Wash 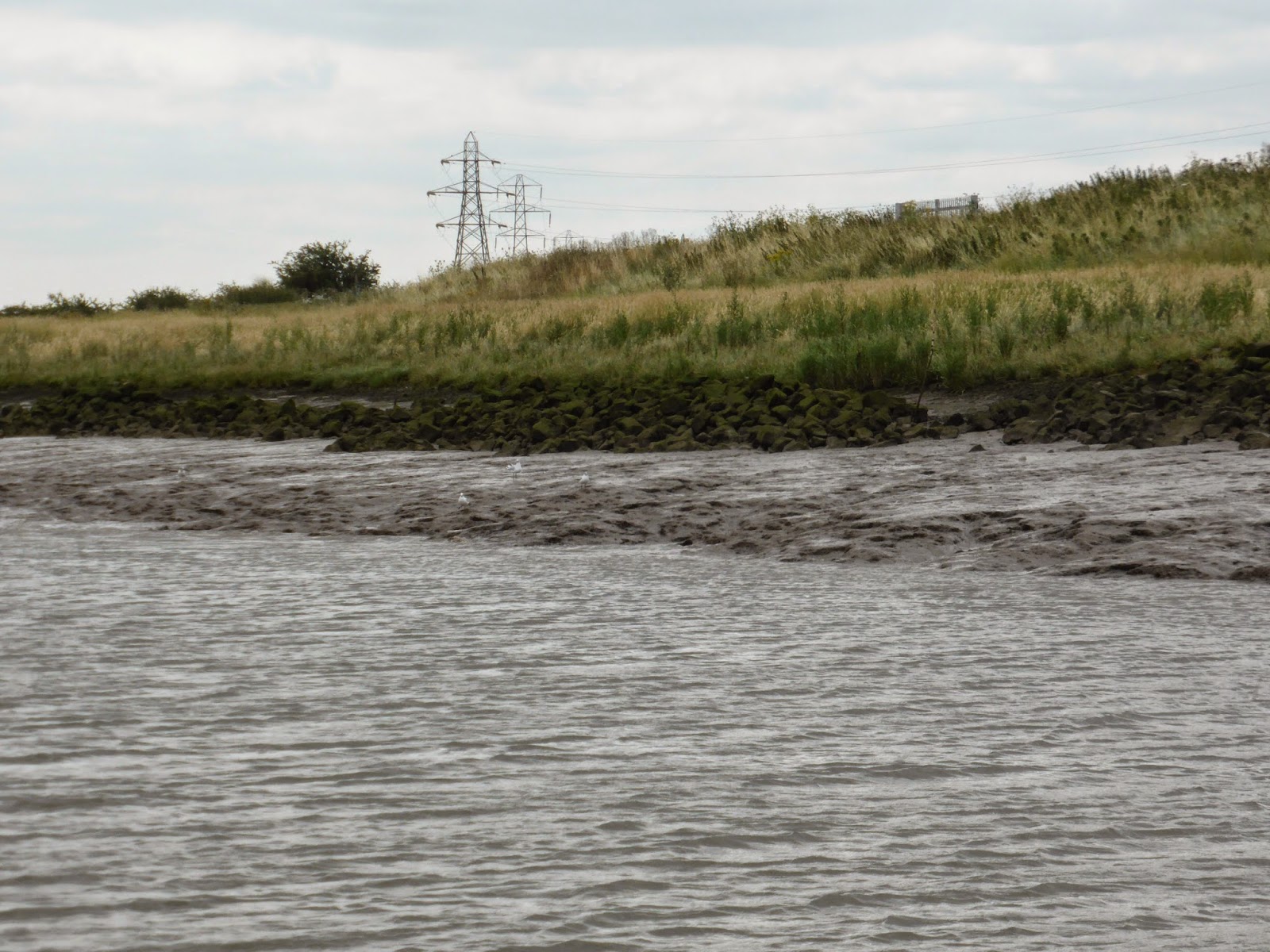 past this fishing boat beached on a sand bank, it's crew busy on deck. 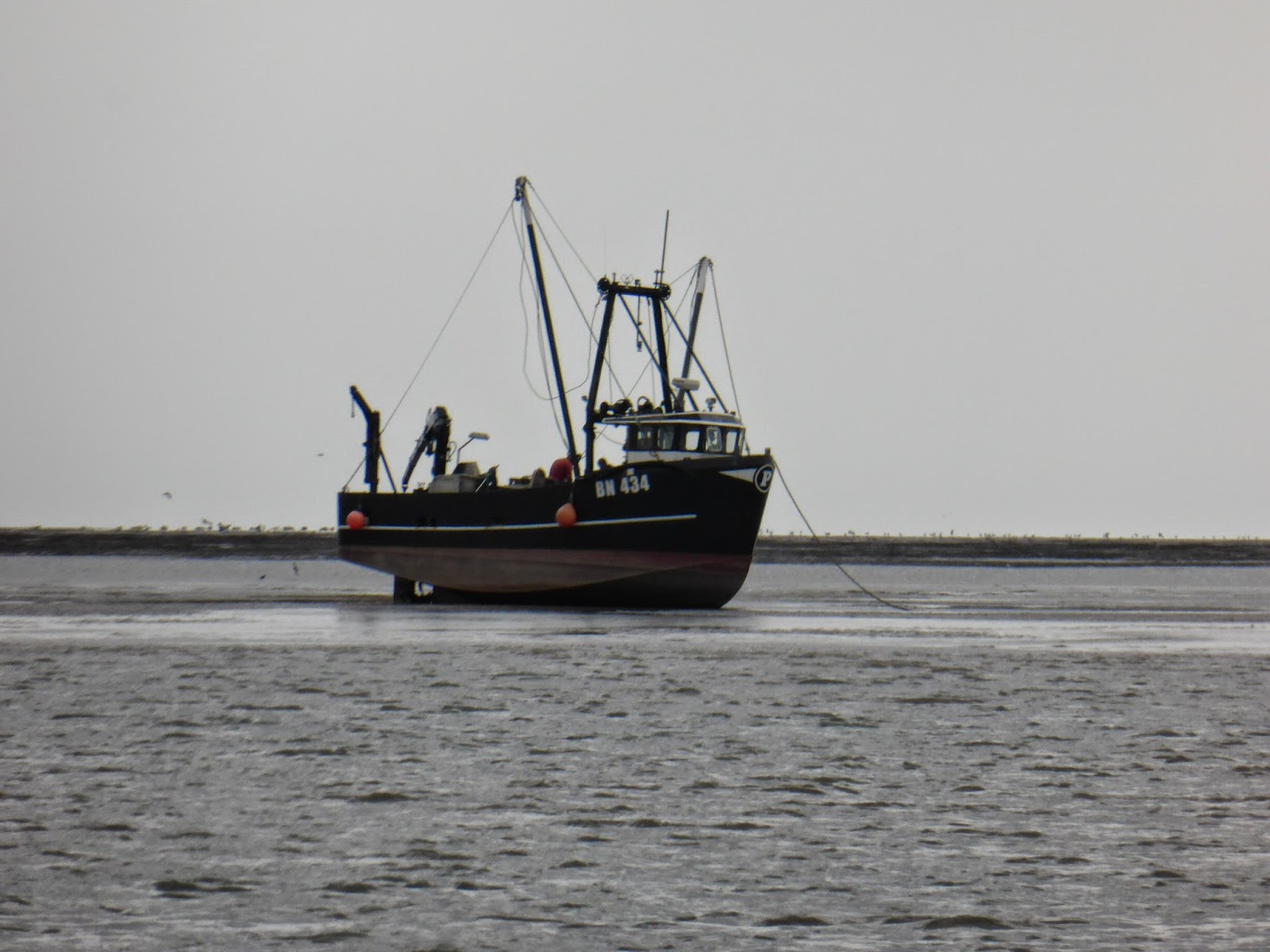 Lunchtime beckoned and although we'd intended having a BBQ on the beach later, we couldn't wait so had an impromptu picnic of a steak butty and a small glass of red wine - well large glass but small portion of wine. 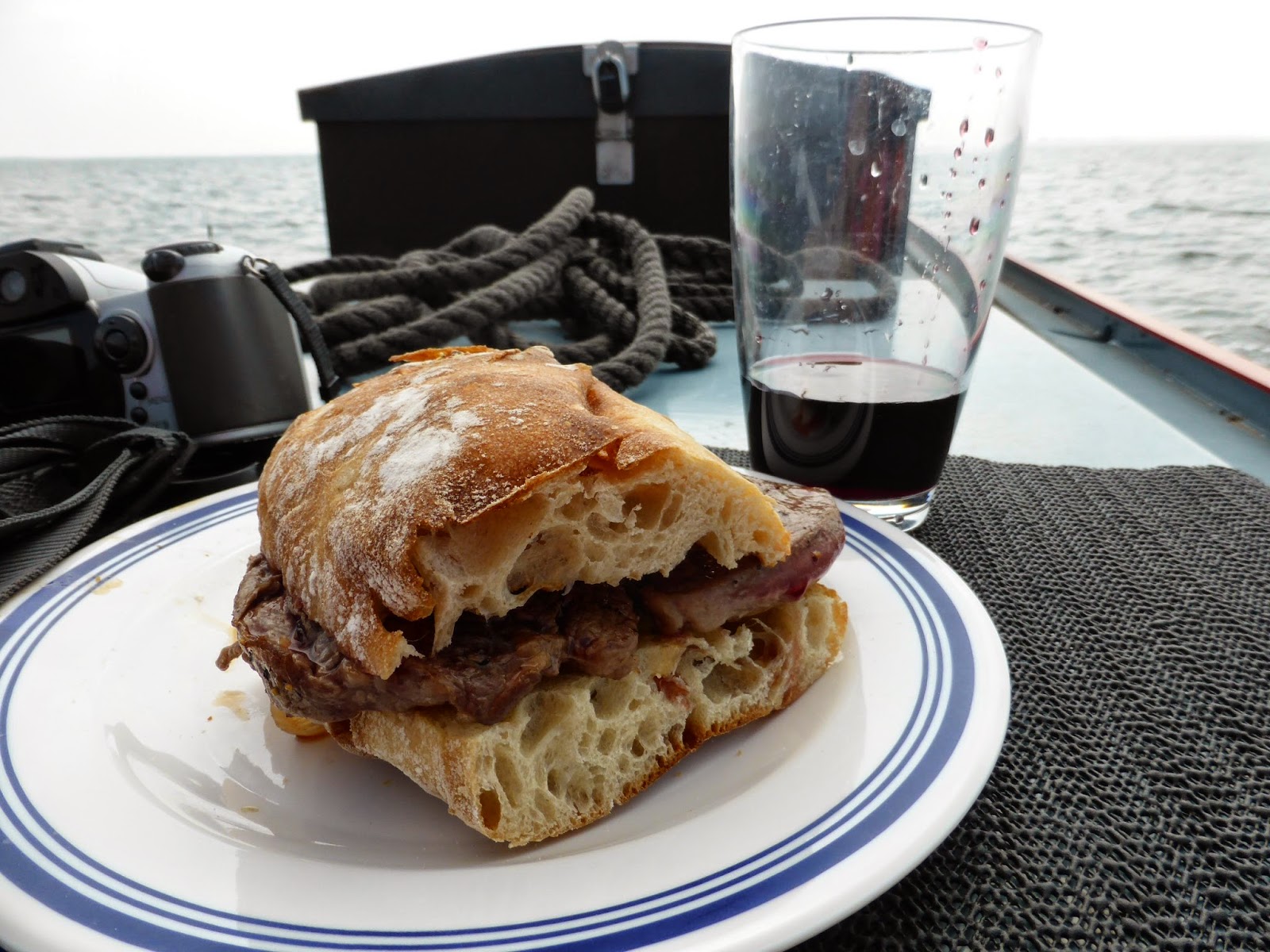 We were second boat in the pre-arranged formation and all boats kept in constant touch with each other by VHF radio. The weather was perfect, sunny but not too hot, low speed winds and only small waves. 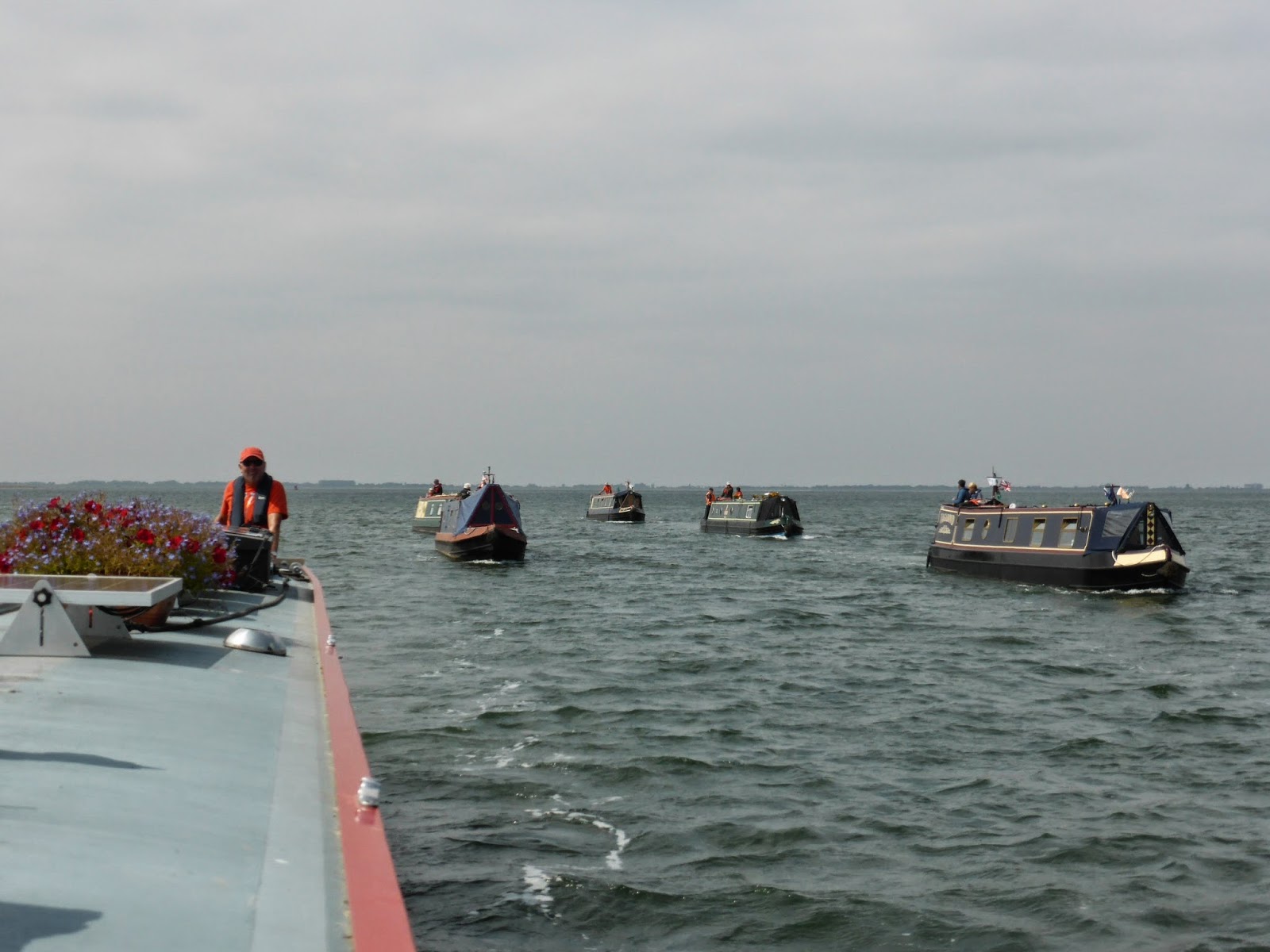 We'd gone out on an ebbing tide and as it dropped we started to see sand banks some of which had basking seals on them. 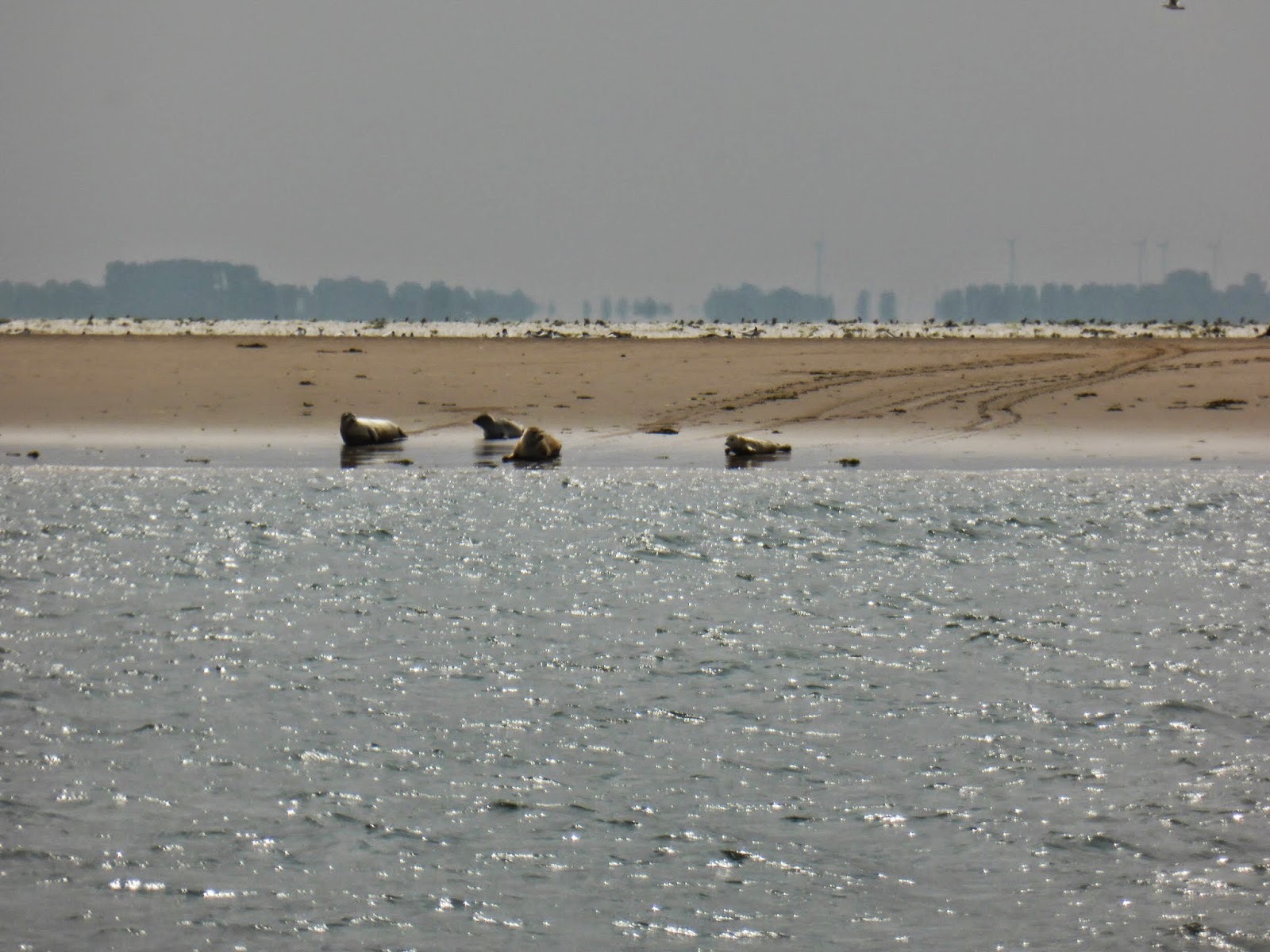 It took us longer to reach our own specific sand bank than had been anticipated as one of the boats kept lagging behind due to an overheating engine. Eventually we got to this buoy - RAF no. 4 and saw the emerging sand bank we were going to beach on 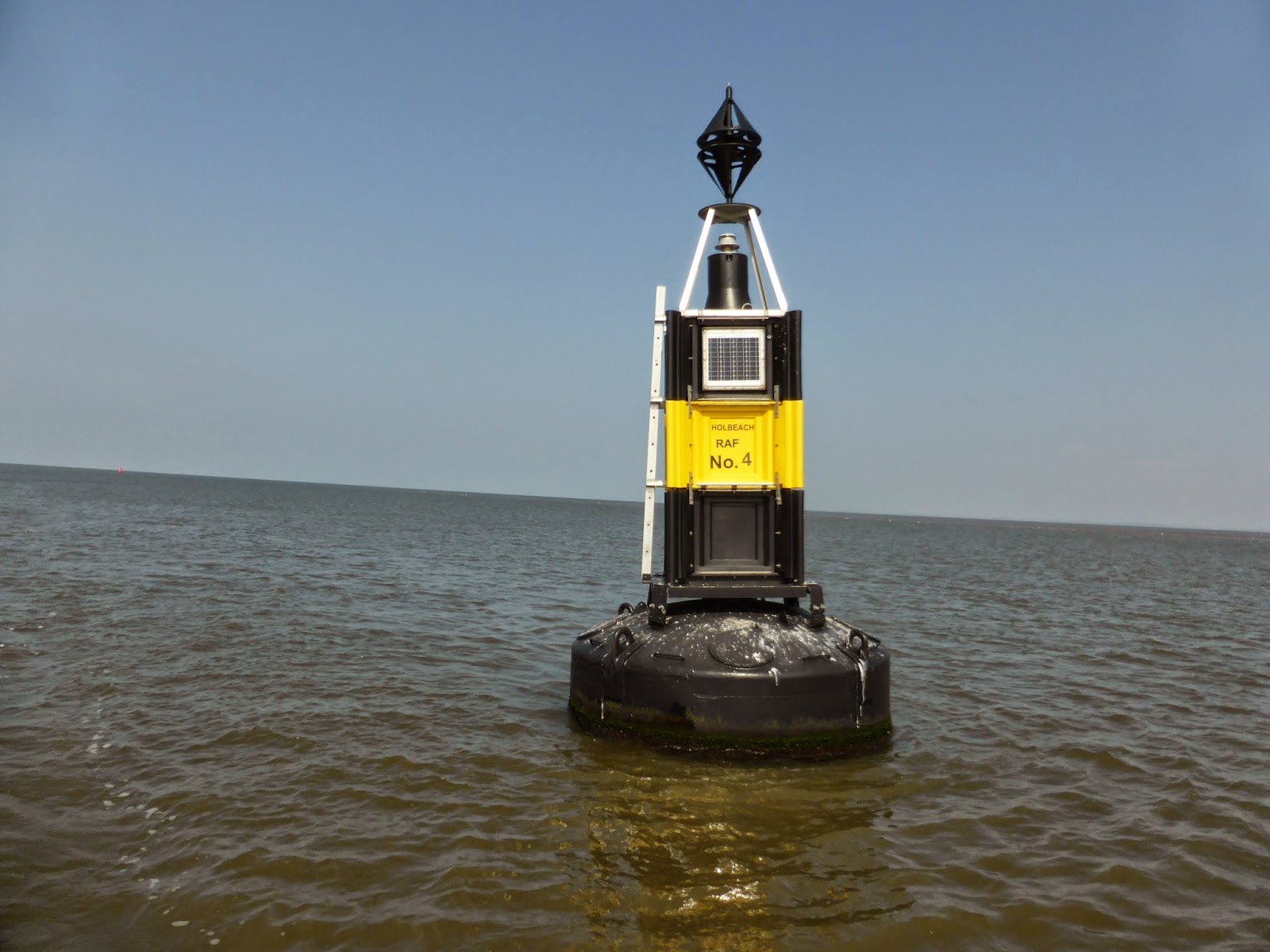 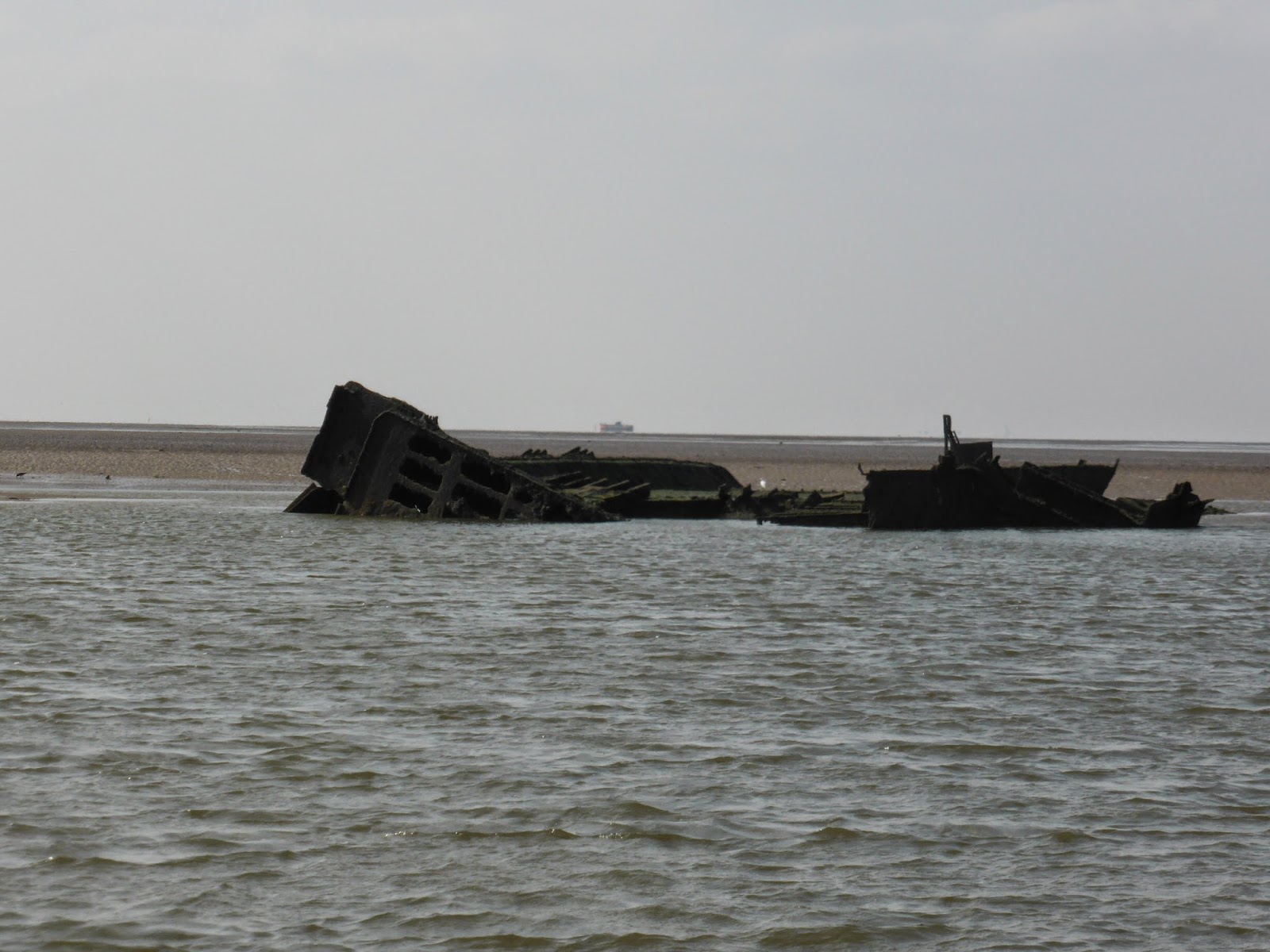 We beached the boats to the left of the wreck 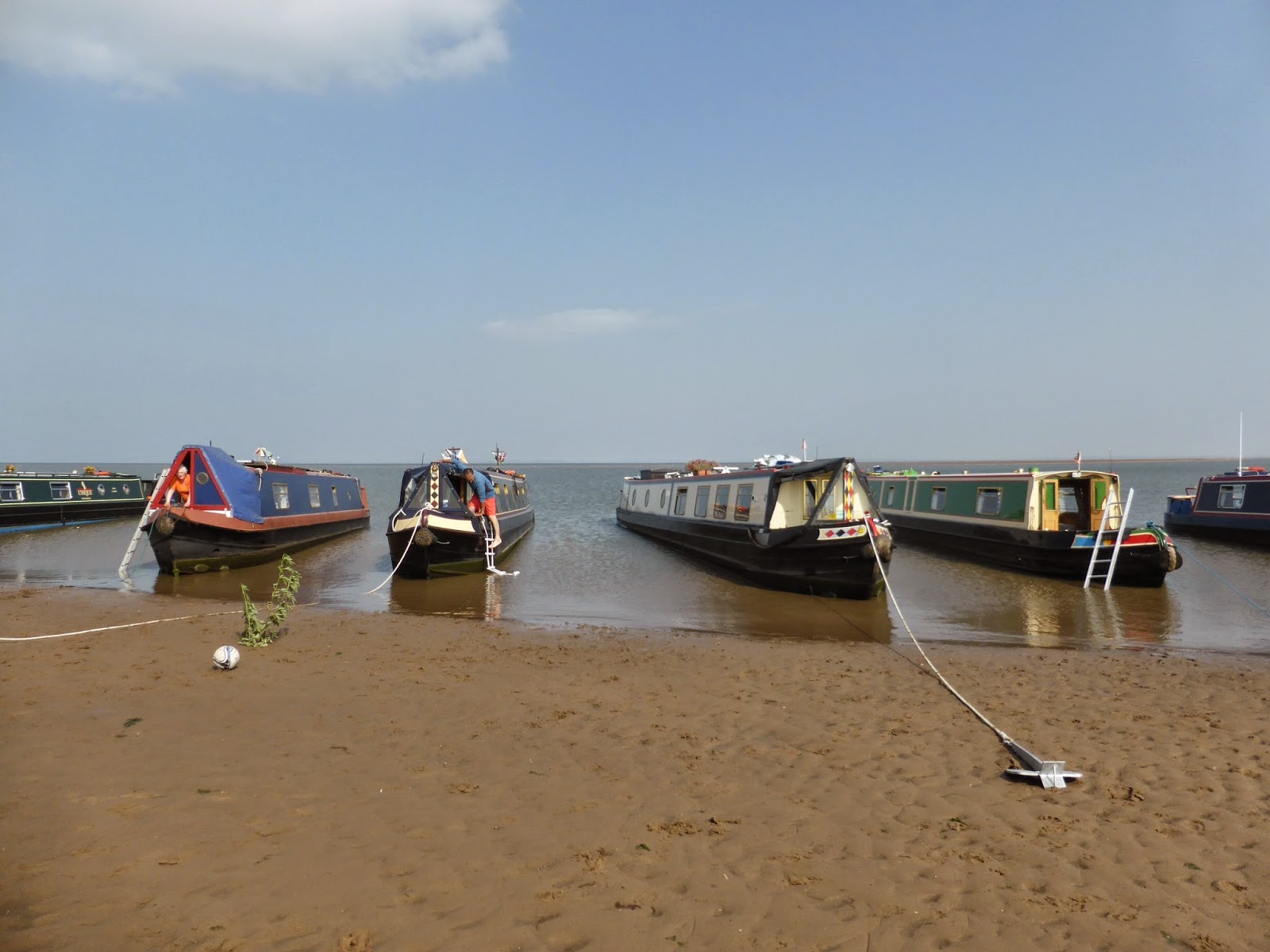 and all got off to set up our picnics and party. Some did it with more style and panache than others but we all had a ball. 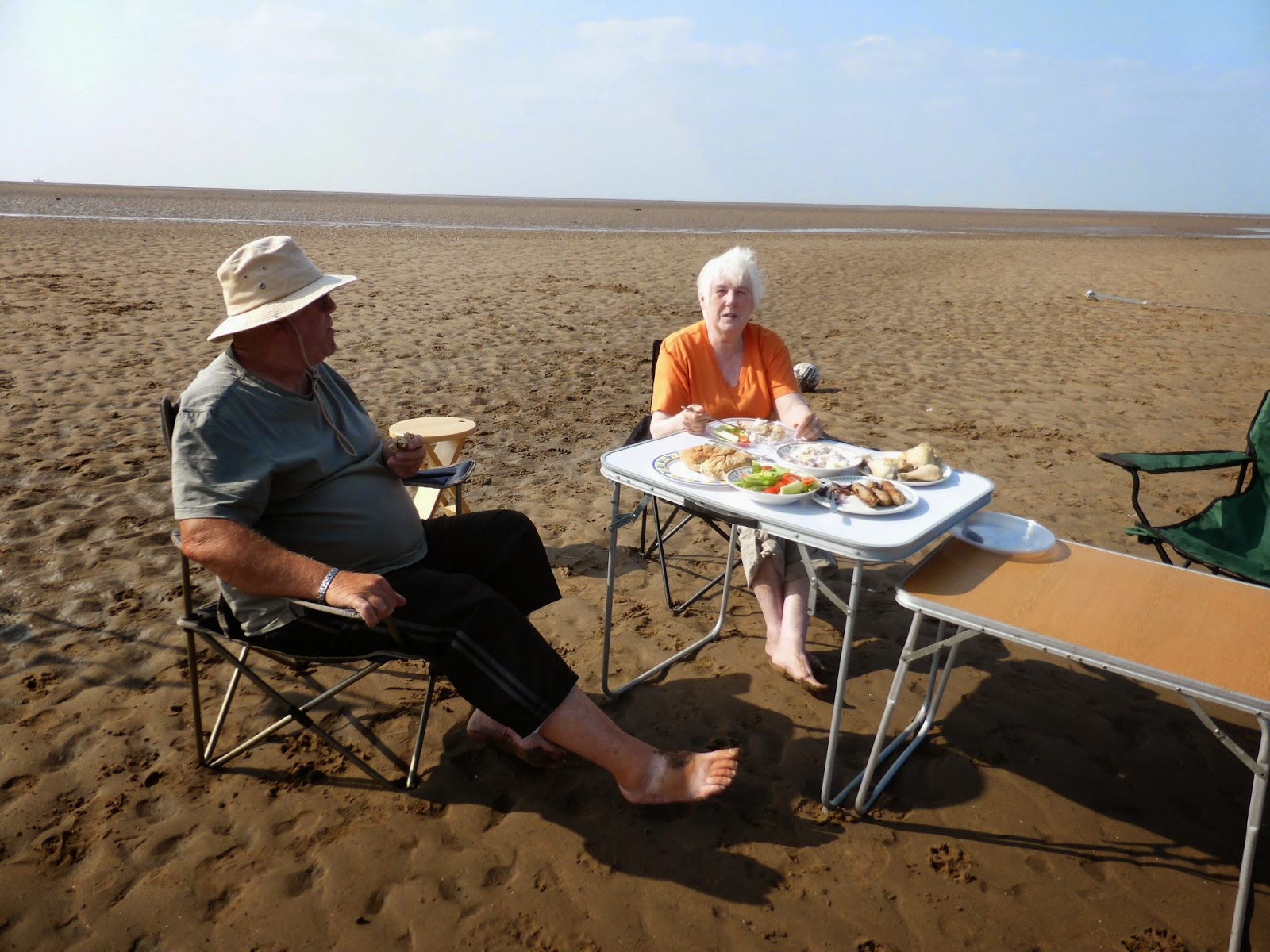 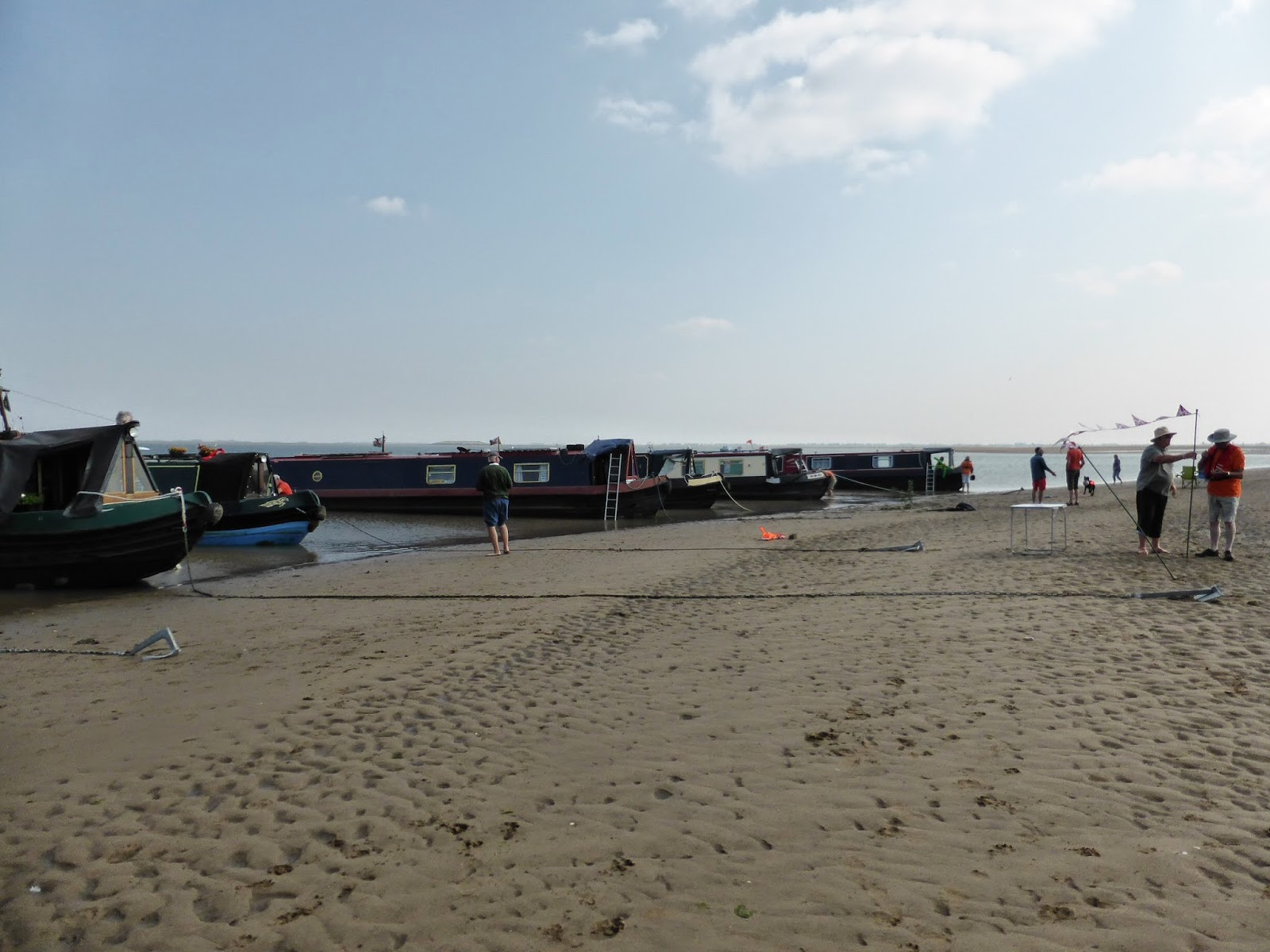 The two dogs in the convoy got off to do what dogs do naturally. They'd both been very well behaved during the long trip and Bentley ran round like a mad thing making up for lost time. He saw a seal in water and kept trying to swim out to get it. I think he thought it was a ball as all he could see was the top of it's head. 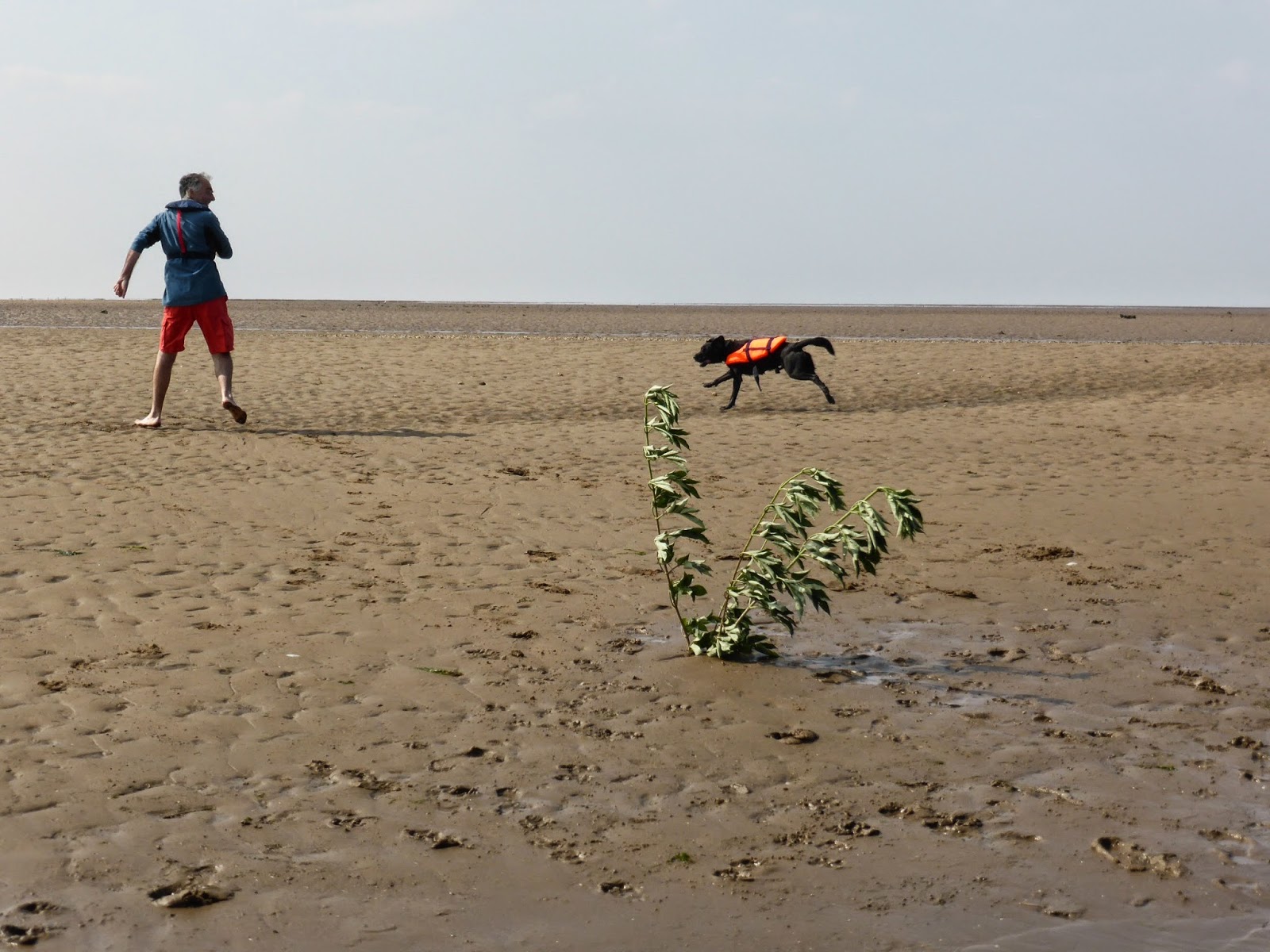 I walked over to have a look at the wreck 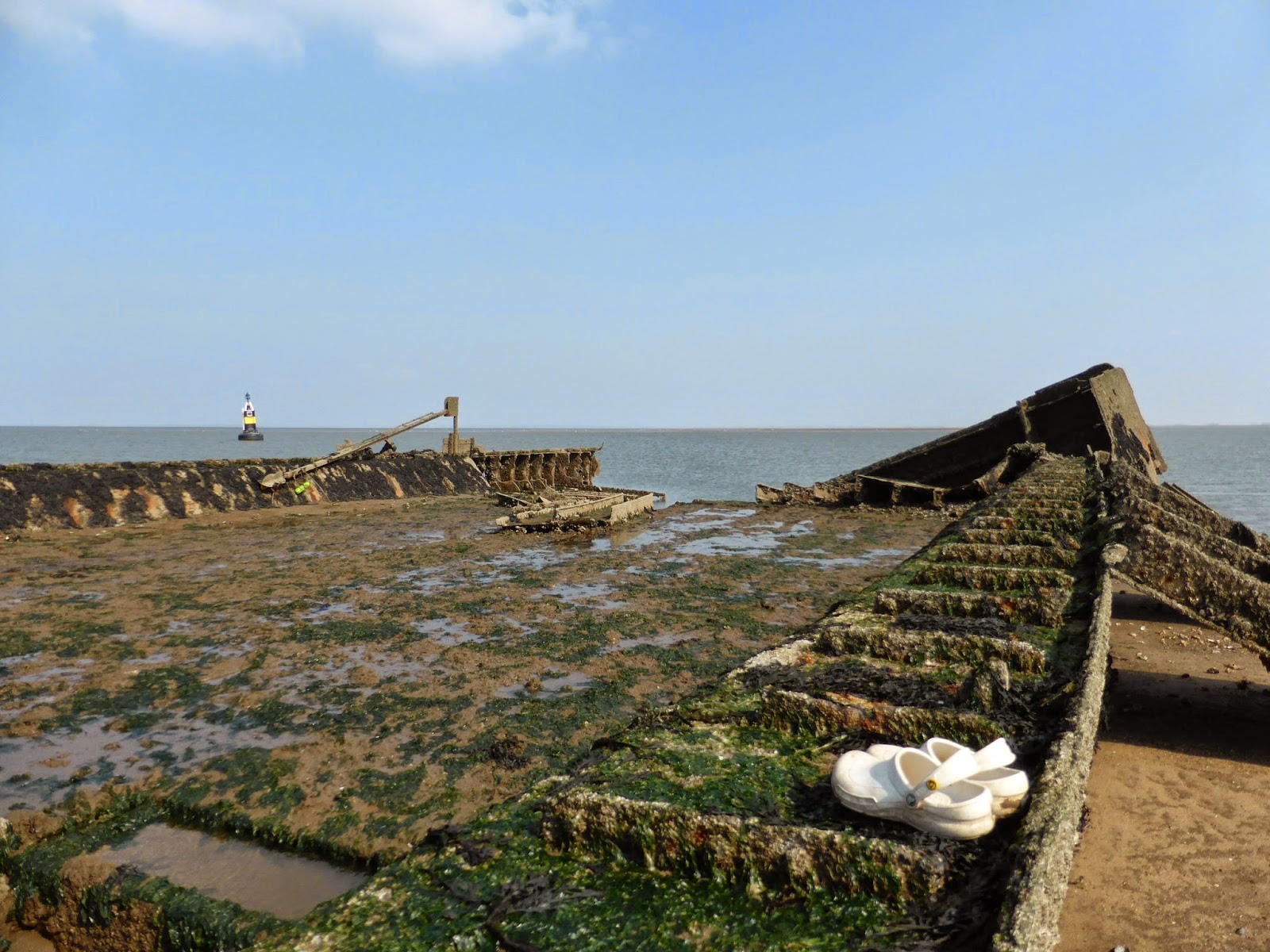 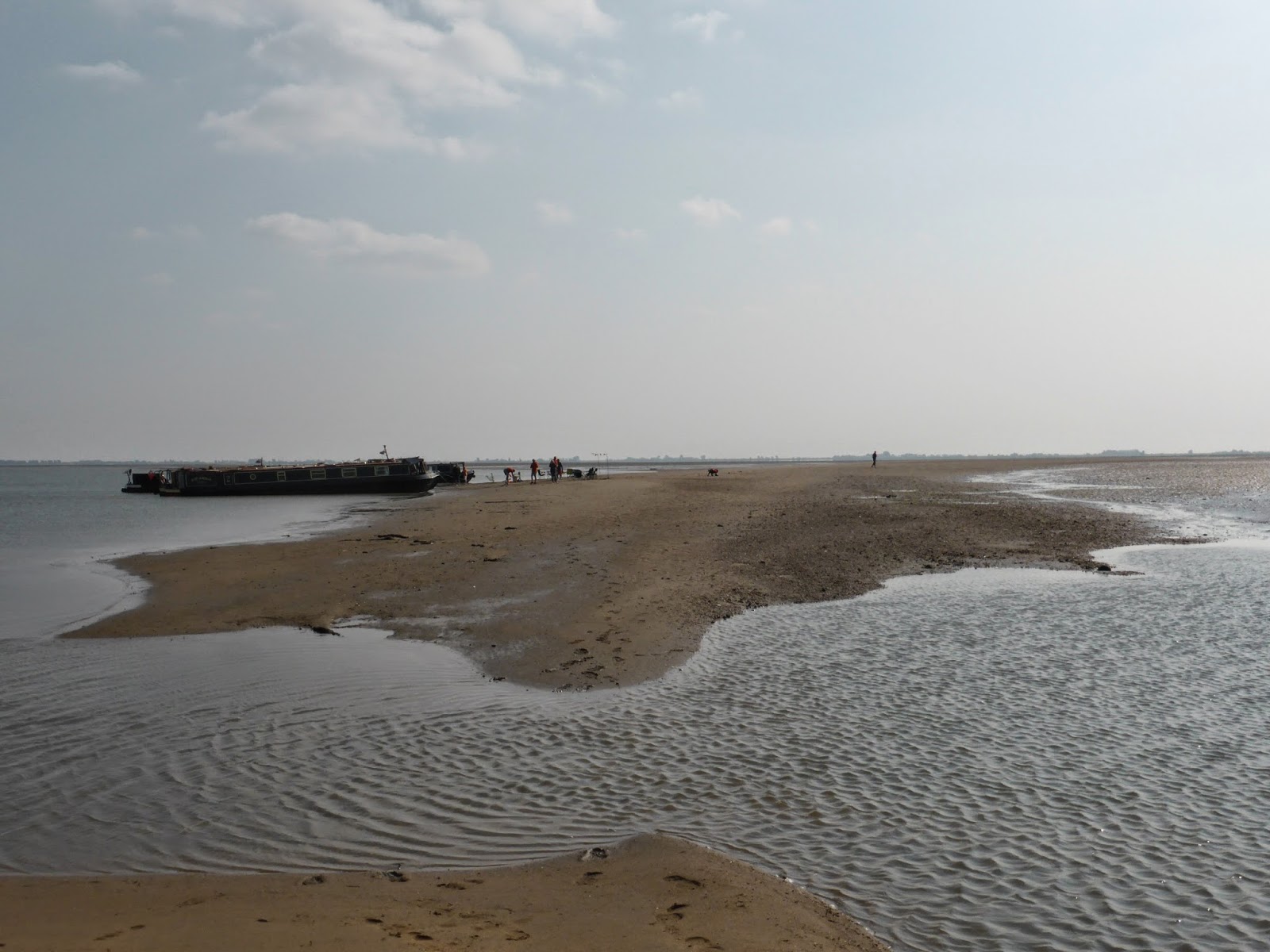 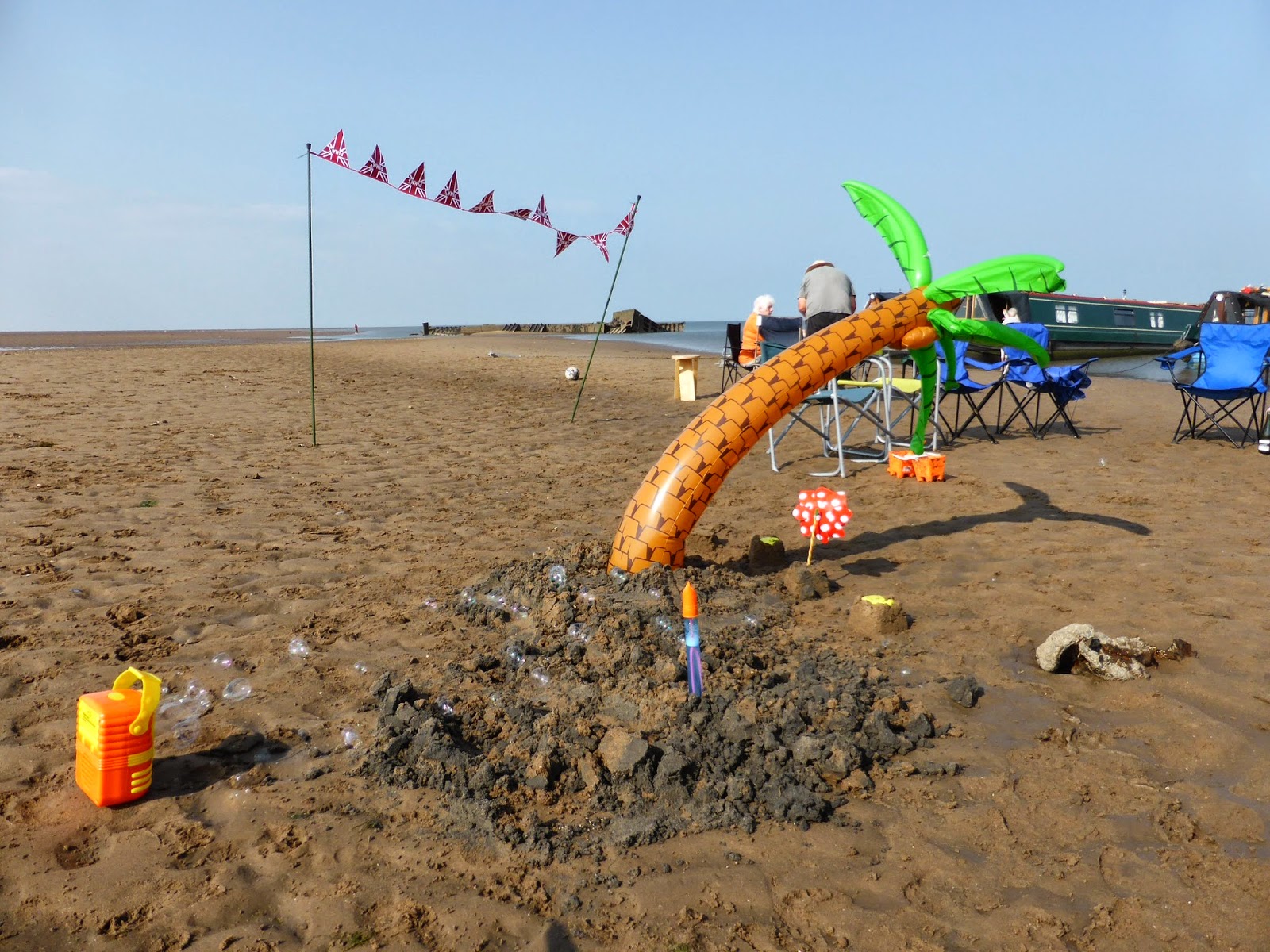 The sand bank and wreck are markers which the RAF use during training flights and we had some wonderful displays from a jet plane doing low level passes and barrel rolls. Unfortunately it was far to fast to photograph.

Our time on the island came to a premature end when the tide started coming back in and the boats started re-floating. It wasn't a problem as we'd all put down anchors, but it was just a shame we'd arrived late and had to cut our celebrations short. We had to "stem the tide" by circling around for half an hour until the sand bank and wreck were almost totally submerged, which meant there was sufficient water in the channel for us to carry on our journey towards Wisbech.

We passed an island with more beached fishing boats 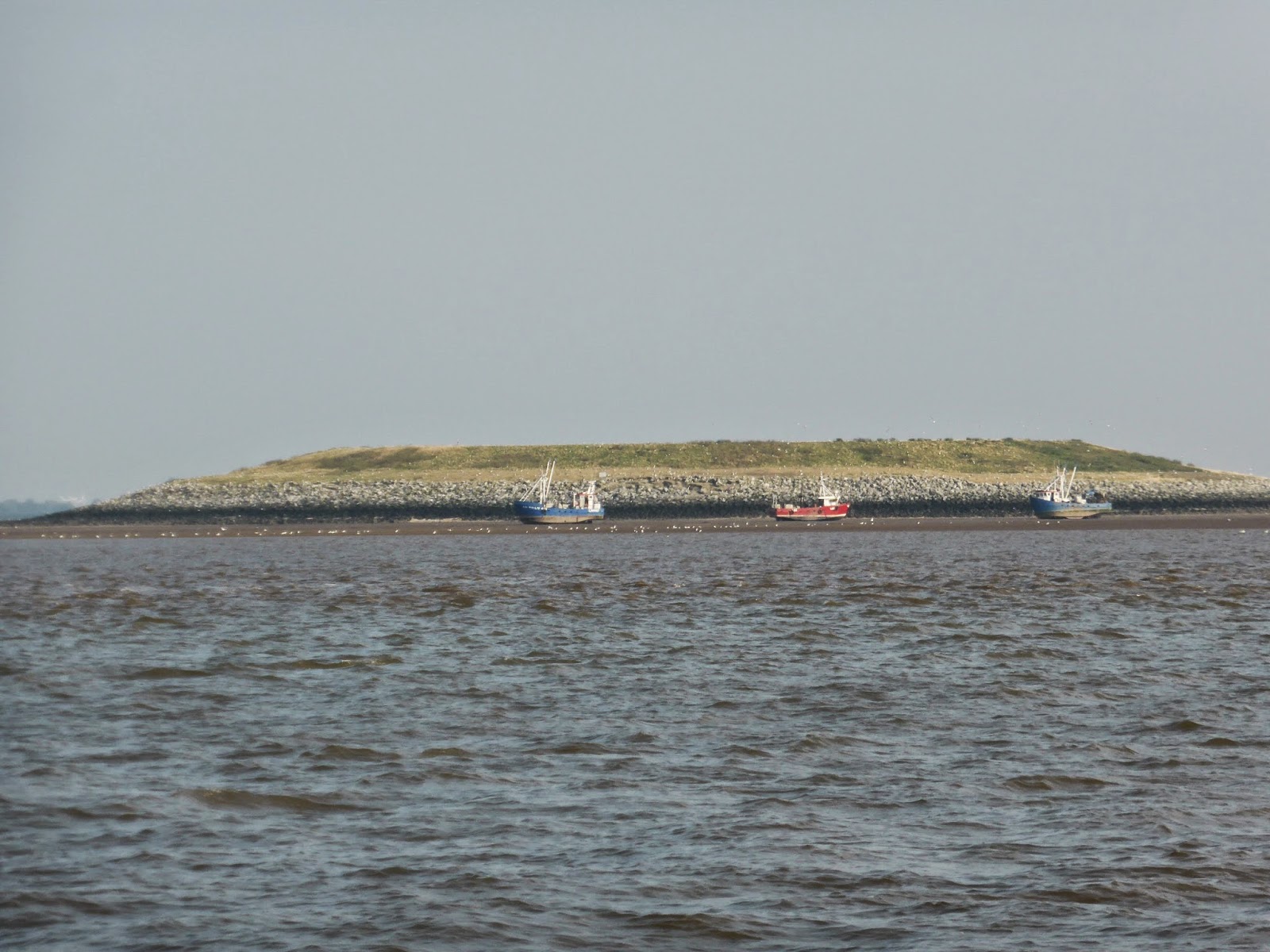 before heading into the River Nene and meeting this very fast pilot boat. The wake it made produced bigger waves than we'd had out in the Wash and it was quite bumpy for a while. 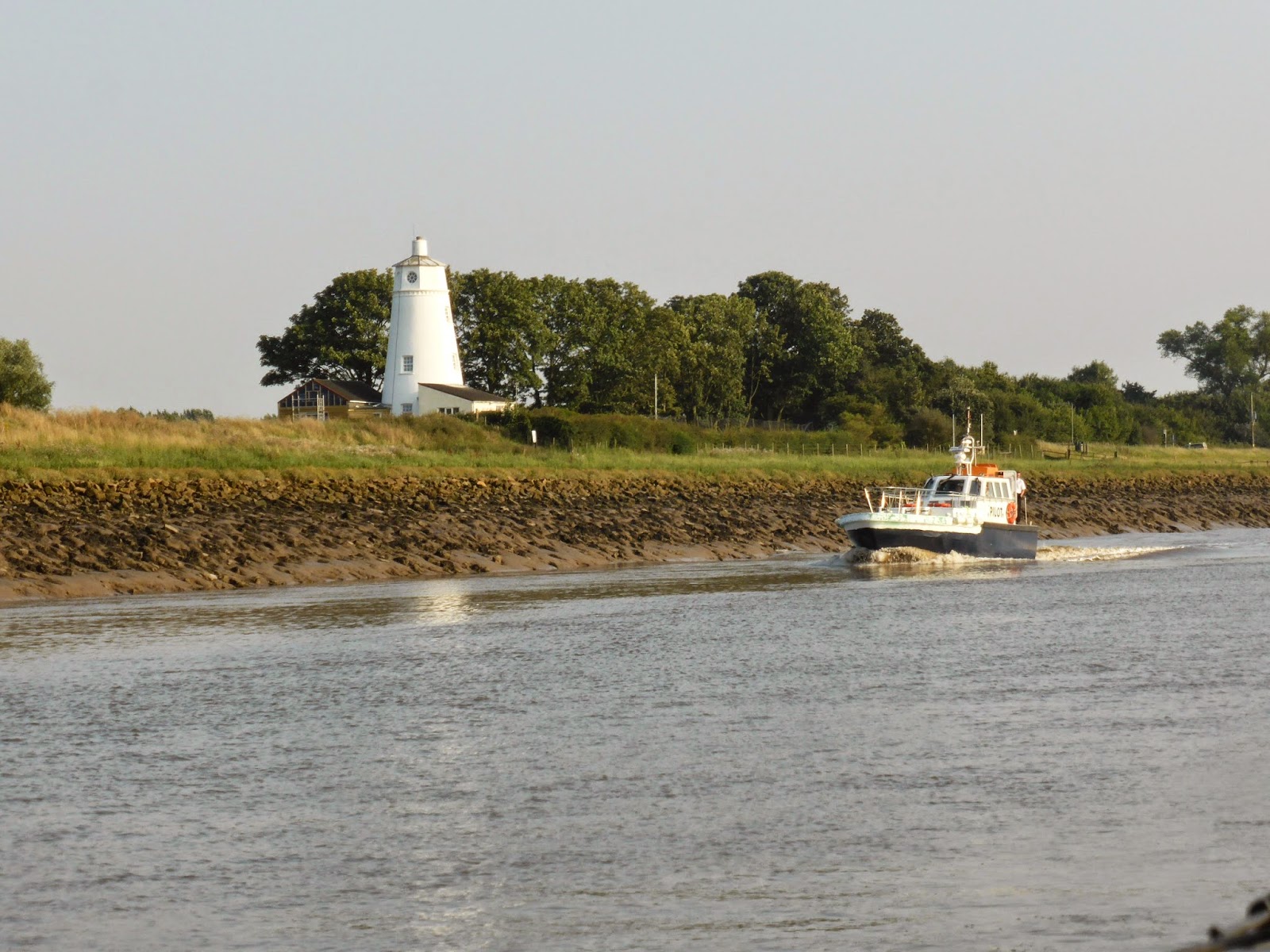 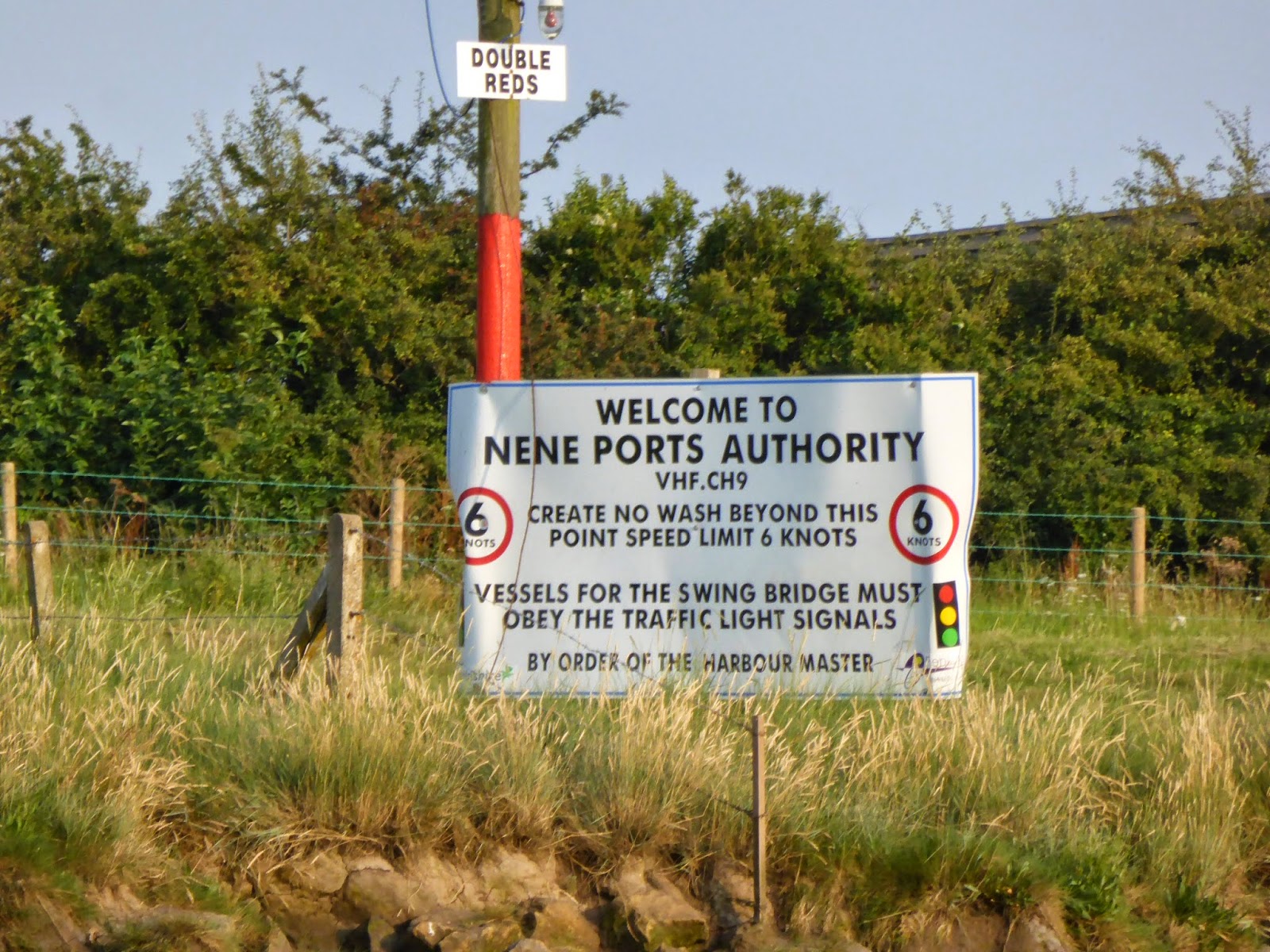 As we approached our destination the boats started getting bigger 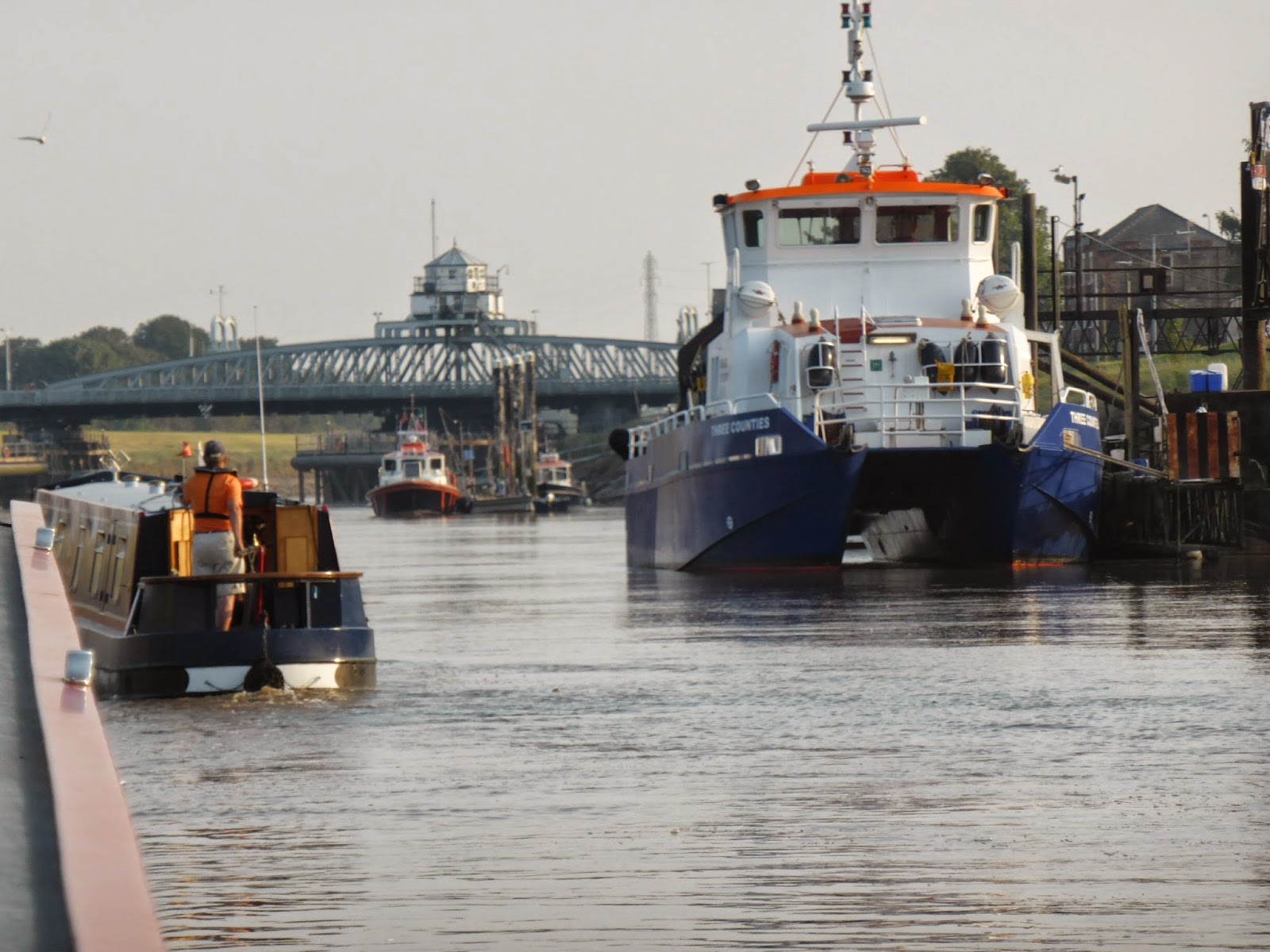 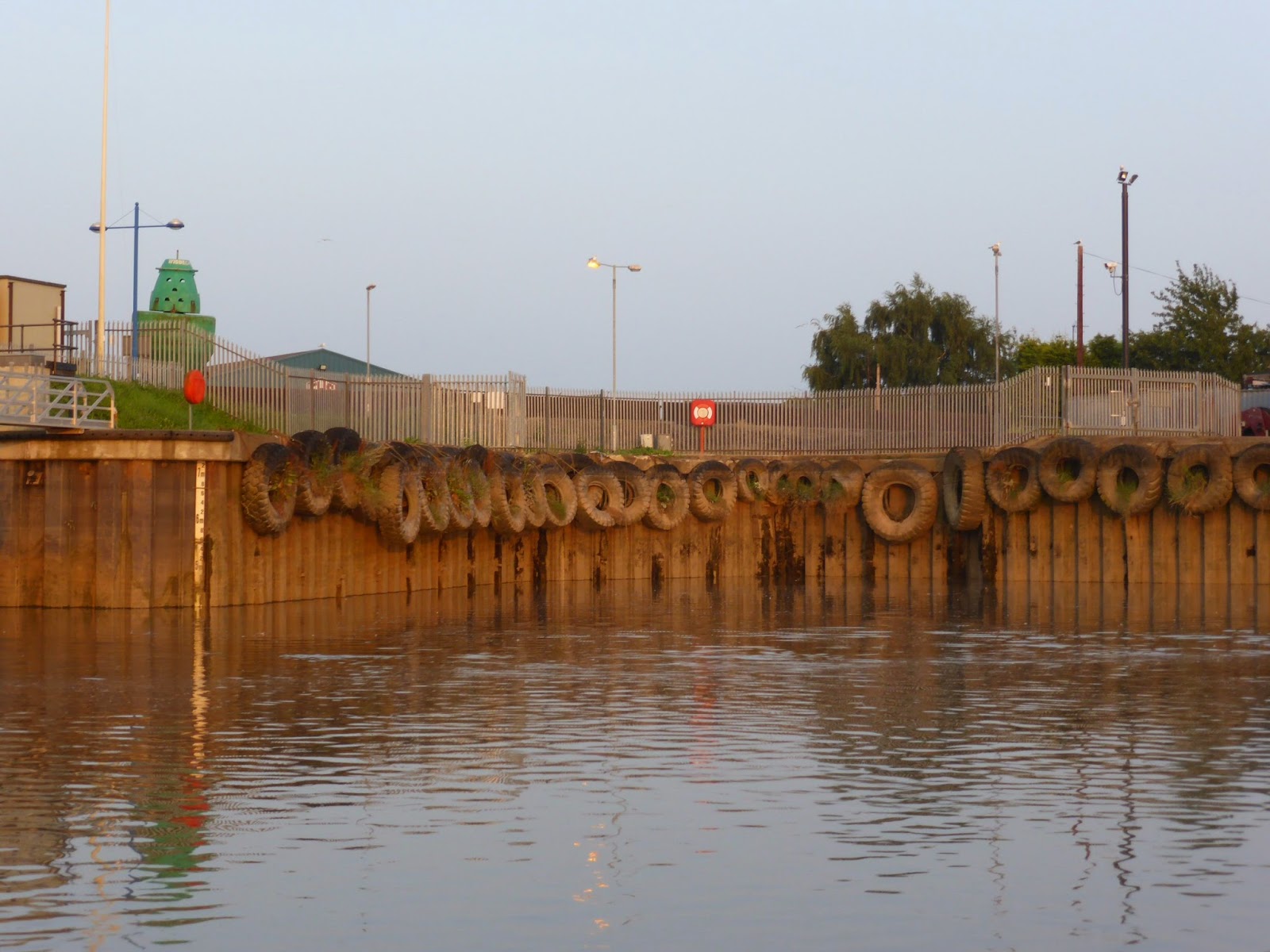 It took us two and a half hours to get from the mouth of the Nene to our moorings at Wisbech Yacht Harbour and by that time most of us were pretty tired. While some of us decided to call it a day and stood around discussing the trip while evening meals were prepared, a couple of boat crews went to the pub.  For once we weren't amongst the pub goers! 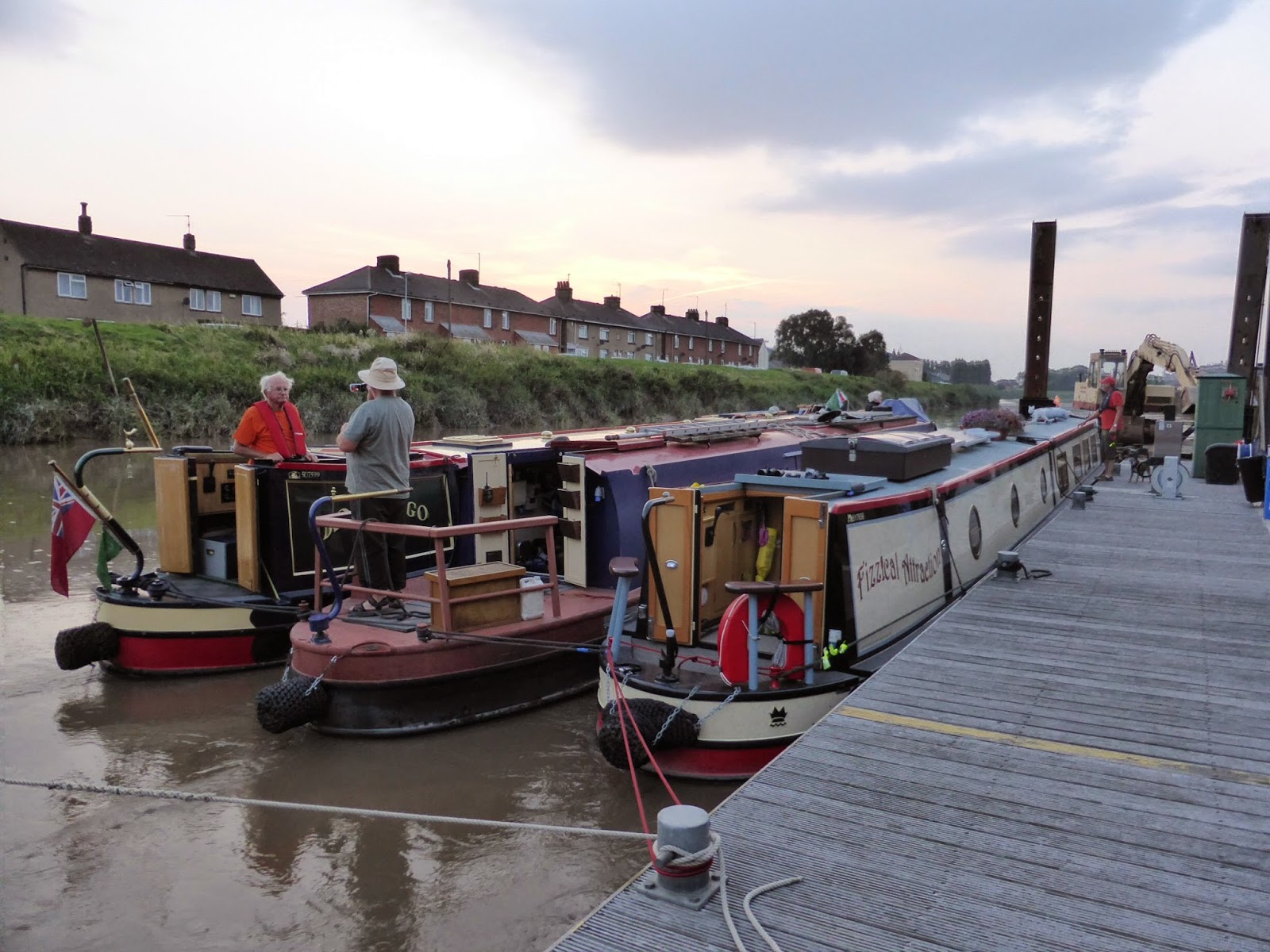 The whole trip was just fantastic. Would I do it again? Without a doubt, although next time I'd do it from Wisbech to Boston for a change.

If you fancy making the trip yourself I'd definitely recommend doing it with a club or large group of boats. Not only do you get the craic but there's definitely safety in numbers.

Email ThisBlogThis!Share to TwitterShare to FacebookShare to Pinterest
Labels: crossing the wash

Fantastic photos. We are planning on doing it next year - can't wait now!

The tyres are in the turning basin at Sutton Bridge, like a very large winding hole, that ships use to turn. In 2000, Gill, my wife worked at Wisbech Port and a boat went aground there whilst turning and broke its back. Link if interested.
http://www.bridgewatch.org.uk/town-jobs.html

Loved reading your blog - am getting a bit jealous - but it looks like a real adventure. Nonny X

looks brilliant.Wish we could have been there, but family member's health prevented it ...this time! Mo Wood NB The Great Escape CCCC

Very helpful - I am planning a similar trip this August. Currently five boats in our convoy ..